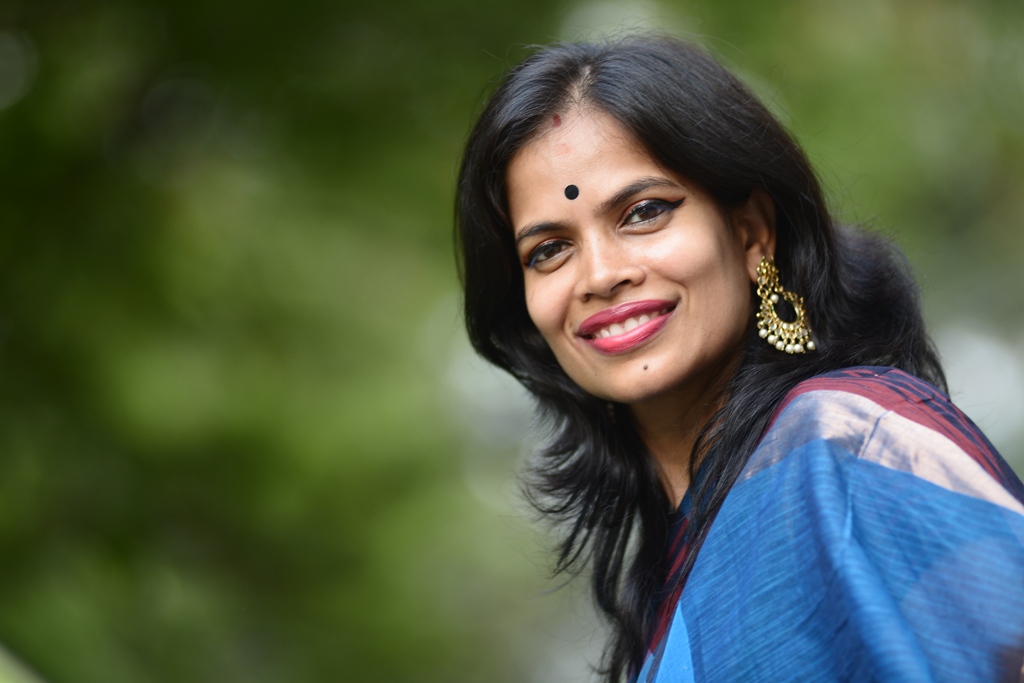 The pull she felt towards Odissi was unexplainable. Madhulita Mohapatra would remain glued to TV set during the telecast of performances by legends of Odissi, Guru Kelucharan Mohapatra and his disciple Sanjukta Panigrahi, absorbing whatever she could. Lack of opportunities, however, could in no way dampen her passion for the classical dance form and as fate would have it, she finally enrolled for formal training in Odissi at the age of 18.

Though a late beginner, Madhulita has already carved a niche for herself in the Odissi arena. She was recently honoured with IIDF Award 2017 for Odissi.

Odisha Sun Times spoke to the Odissi danseuses, tracing her journey while battling odds to pursue a career in dance.

A native of Odisha’s Bhawanipatna, she was initially drawn to the lively and colourful tribal and folk dance forms of Kalahandi district. “It was Guru Shri Bhimsen Sahoo who initiated me into Sambalpuri folk dance. I got to know about him from a friend, who she took me to him when I expressed my desire to learn the folk form,” she said. Her parents, however, we are not every supportive of her interest to pursue dance and instead wanted her to concentrate on academics. “I would sneak out of the house in the evenings, jumping off the compound wall, and run to the nearby dance school. I would then end up making stories to escape spanking from my father,” she said.

Madhulita performed folk dance and also Odissi, which she picked by watching television, at different shows. Her dreams soon got wings when Odissi Guru Krushnachandra Sahoo moved to Bhawanipatna from Bhubaneswar and opened an institution, where she rightly began her formal training.

A chance to pursue higher education in Bhubaneswar opened the floodgate of opportunities for her. At the Odisha capital, she joined Odisha Dance Academy and honed her skills under the guidance of late Gangadhar Pradhan and Aruna Mohanty. “I also took private classes from Guru Pabitra Kumar Pradhan. I am continuing by training under Aruna Mohanty, who is one of finest teachers, a great mentor and guide. She brings out the best in every student of hers. I owe my identity as a dancer to her,” she said.

The untiring grapple to balance academics and her passion for dance went on till she completed her Masters in Business Administration. “By fairing well in education, I could keep my parents happy and pursue dance,” she said. After completing her masters, she took up a job. However, it affected her training and dance suffered. “I was married by the time I completed eight-year training in the dance academy. My husband supported me wholeheartedly, which gave me the courage to quit the job and take up dance fulltime,” she said. It was his job which brought her to Bengaluru, where she now runs Nrityantar Academy of Performing Arts.

Shifting to Bengaluru about eight year back proved to be a boon as she could immersion herself completely in dance. Her desire to promote and serve Odissi gave shape to Nrityantar. “I started by teaching children who would gather at my place on weekends. The number slowly grew and that is how my dance school came into being. I also took classes in some schools that promoted the dance form. The children then knew only about Bharatnatyam and often addressed me as ‘Bharatnatyam Miss’. It took me a while to make them understand the difference between these two classical dance forms and today I can boast that they share my passion for Odissi.”

Madhulita describes her experience in Bengaluru as enriching and motivating. “My gurus, artistes and art lovers in Bengaluru have been loving, kind, encouraging and supportive in the last eight years,” she said.

This also sowed the seed for annual Odissi dance festival, Naman. “The idea behind ‘Naman’ was to pay solemn tribute and salutations to the Guru, the visible embodiment of God. I was fortunate that Guru Shri Gangadhar Pradhan blessed and inaugurated the festival in 2010. Naman is a humble attempt to bring together and showcase varied styles and schools of Odissi dance. The audience not only clearly distinguishes the subtle nuances of these styles, but also enjoy them. In its last eight editions, the festival has been very well received with packed halls featuring well-known artistes like Guru Sangeeta Dash, Guru Aruna Mohanty, Guru Bijayini Satapathy, Guru Madhavi Mudgal, Guru Sharmila Biswas, Guru Surupa Sen, Guru Meera Das, among others,” she said.

As a dancer, Madhulita has embarked on a few creative pursuits. “Last year on the occasion of Karnataka Rajyotsava, a cultural programme to commemorate the state foundation day, I premiered my choreographic presentation based on a Kannada Devarnama in Odissi style. It was so heartening to see the response on the special day. In my choreography, I have always tried to explore and innovate with movements from expansive classical vocabulary to refreshing feel of aesthetic experience and enjoyment. These experiments are strictly within the classical framework without diluting the purity of the dance form,” she said. Besides two Pallavis, she has worked on a thematic piece revolving around Savitri and Satyavan with an emphasis on women power.

Despite the success in Bengaluru, it is Odisha where she enjoys performing the most. “It is a divine feeling. To be able to perform before your Gurus and seniors is a blessing.” she said.

This is something she often misses being away from home. “I owe some of my best days in life to Odisha Dance Academy. It also allowed me to witness and enjoy Odissi performances all year through,” she said.

Today, she lives and breathes Odissi, which has also helped her to grow as an individual. “Professionally, it helped to become more patient and focused. On a personal level, it taught me humility and made me respectful, calm and compassionate,” she added.

Odisha FB suicide video: Here’s what wife of deceased said in her defence