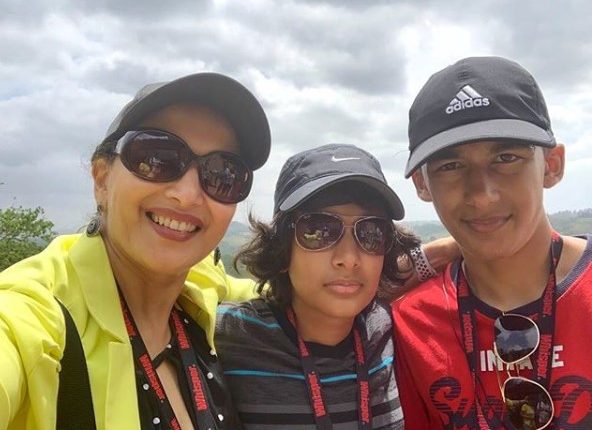 Mumbai: Actress Madhuri Dixit-Nene wants her teenage sons to follow their passion. She adds that if a person converts his passion into his job, then he doesn’t look at it as work and it give him joy.

Madhuri has two teenage sons named Arin Nene and Raayan Nene and, on what kind of film launch she was expecting for her sons, she said: “I don’t know whether they want to get launched. I don’t want to force them. I don’t know what they are going to do. I feel kids should follow their passion because once you are passionate about something, you never feel that you are going to work, because every day will be a pleasure to get up and do something. So, I expect that from both of them.”

The actress was interacting with the media at the trailer launch of “Guns Of Banaras”, along with film’s cast comprising Karann Nathh, Nathalia Kaur, Ganesh Venkatram, and the film’s director Shekkhar Suri, producers Ashok Nath, Shaina Nath and Rakesh Nath, music director Sohail Sen and stunt director Sham Kaushal on Thursday in Mumbai.

On her Valentine’s Day plans, she said, “For us, everyday is Valentine’s Day. We don’t wait for that one specific day. Every day, we are doing things for each other. On this day, people exchange cards and roses, so it’s a just a day to celebrate any kind of love. It can be towards yours parents as well. I always tell my kids that every day should be a Mother and a Father Day. For me, it’s the same as well, be it for my mother and father or for my mother-in-law and father-in-law.”

Madhuri has romanced many actors on the screen. So, how romantic her husband Dr. Sriram Nene? “He is very romantic! The happiness you see on my face is all because of that,” she laughed.

Rakesh Nath, who is a co-producer of “Guns Of Banaras” and also the father of the film’s hero Karann Nathh, worked as Madhuri’s manager in her heydays, which explained why she attended the trailer launch.

“Guns Of Banaras”, scheduled to release on February 28, will mark his return as a Bollywood hero almost 16 years after his last release.

Vijay Deverakonda helps over 17,000 families through his Middle Class Fund