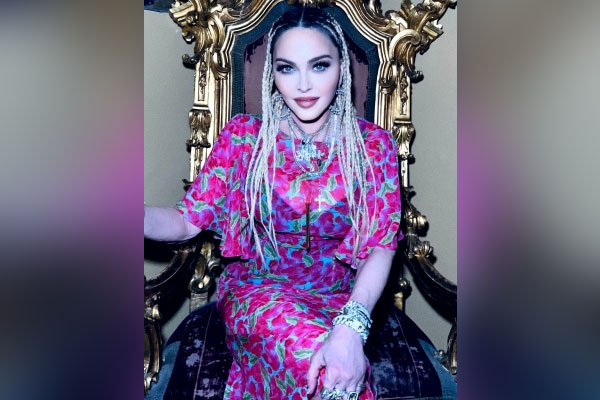 Making use of her Instagram account on Monday, November 14, the Queen of Pop posted a video and photos of her covering her bare breasts only with her hair and a $3K Balenciaga purse, reports aceshowbiz.com.

In the footage, she donned a black corset, thigh-high stockings and fishnet gloves.

In one of the pictures, Madonna was seen sitting in her marble bathroom inside her New York City residence as she had a black curtain and special lighting to accentuate her features.

The racy social media posts came just hours after she warned critics not to bully her. The ‘Time Goes By’ singer retaliated by sharing an image of herself with long flame-coloured hair, wearing ripped jeans and a lacy corset.

Madge accompanied the picture with: “Madonna is the first female act from the 80s to have 6 tracks with over 200M streams on Spotify.” She later wrote over the photo: “STOP BULLYING MADONNA FOR ENJOYING HER LIFE.”

Prior to that, Madonna was publicly called out by 50 Cent after she posted a TikTok video of her lip-syncing to a Baby Keem track.

“I told y’all grand ma was on bulls**t! like a virgin at 64. LOL,” the “In Da Club” rapper wrote after critics accused the mother-of-six of using “rap music for clout” and called her actions “pathetic” and “disturb(ing).”

This wasn’t the first time Madonna hit back at Fiddy. Back in December last year, the ‘Vogue’ songstress took to Instagram to fire back at the emcee after he mocked a sexy selfie she posted.

“Here is 50 Cent pretending to be my friend,” the singer wrote in text overlapping the image. “Now you have decided to talk smack about me!”