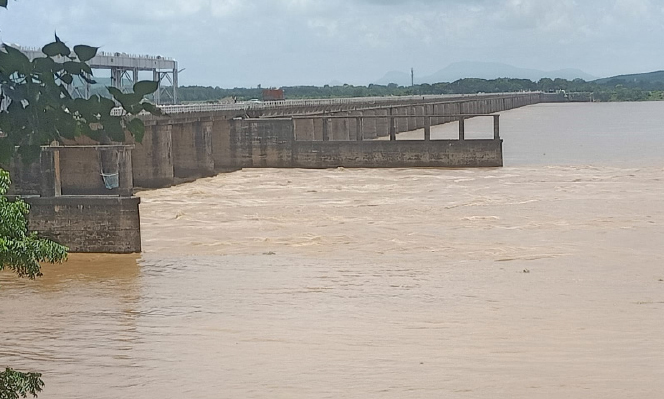 The authorities opened 34 of the 64 sluice gates of Hirakud dam due to rise in water level in the reservoir following heavy rain in the upper catchment area of Mahanadi in Chhattisgarh.

“Mahanadi is now flowing over its danger mark of 26.41 metre at Naraj,” said an official of Water Resources department.

Around 10.50 lakh cusecs of floodwater is being released to Mahanadi through Khairamal while 8.58 lakh cusecs of water is flowing in the river at Mundali barrage, said the official.

“We are expecting a flow of around 10 lakh cusecs of floodwater through Mundali barrage in next few hours,” added the official.

Chief Secretary Suresh Chandra Mahapatra said the state may witness a medium-level flood due to rise in water level in Mahanadi. “We are regulating the water flow in the river and our officials have been put on high alert to meet any eventuality,” Mahapatra said.

Special Relief Commissioner (SRC) Pradeep Jena, meanwhile, said the state government is trying its best to avoid a high-level flood in Odisha. “The water level at Hirikud dam stood at 621 ft today. We have decided to close eight sluice gates of the reservoir. Around 11 lakh cusecs of floodwater may pass through Mundali barrage. We have deployed NDRF, ODRAF and fire brigade personnel in Kendrapara, Jagatsinghpur, Puri, Khurda and Cuttack district to manage the situation,” Jena added.

Odisha govt to spend Rs 1,000 crore for development of Burla…