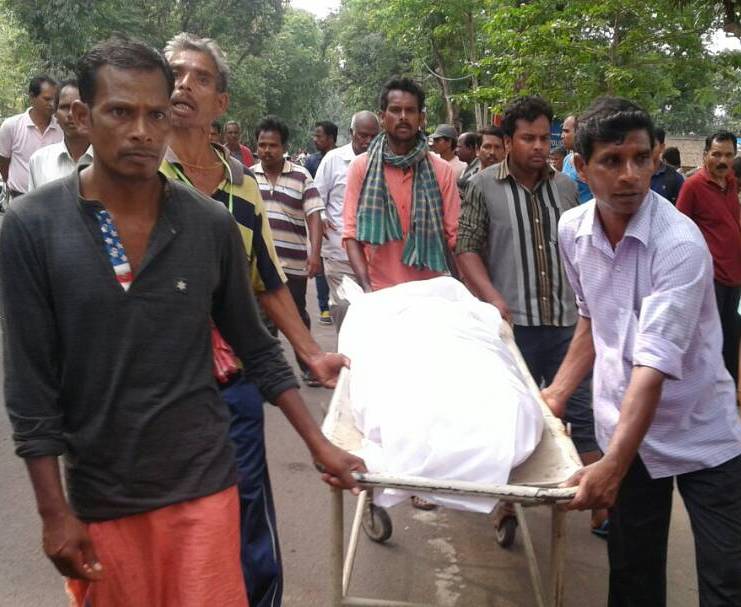 Phulbani: The Mahaprayan Yojna of Odisha government has once again gone for a toss as body of a minor girl was seen being carried on a stretcher in Kandhamal district today.

According to reports, Aliva Pradhan (13), daughter of Chittaranjan Pradhan of Badangapaju village under Khajuripada police limits in the district, drowned in a river today while she was taking bath in the water body.

She was rushed to the district headquarters hospital here but died on the way to the medical.

After autopsy of the body, her father communicated with the hospital authorities to carry it to his village, 25 km away from the hospital, in a hearse under the Mahaprayan scheme of the state government.

However, the hearse didn’t arrive after a long period of time following which he decided to carry the body on a stretcher from the hospital to the district Collector’s office.

While the body was being carried on the stretcher near the SP office, the Town police, on being informed about the incident, reached the spot and made arrangements for the Mahaprayan vehicle.

The body was later carried to the deceased’s village.

Notably, after Dana Majhi, a tribal man, was seen carrying the corpse of his wife on his shoulders due to his inability to afford conveyance in Kalahandi district, the state government had launched the Mahaprayan scheme last year under which government will provide hearse service to beneficiaries for carrying the corpse from hospital to their intended destination.

Beauty tips for working women to get ready fast for party