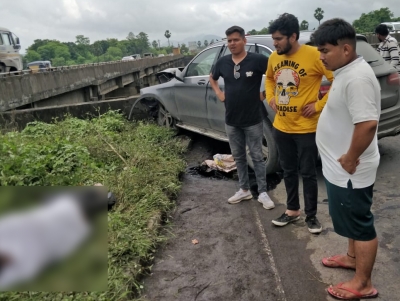 Mumbai: Renowned industrialist Cyrus P. Mistry, who headed the multinational Shapoorji Pallonji Group and was a former Tata Sons Chairman – was killed in a road accident at Palghar in Maharashtra here on Sunday afternoon. The state government has ordered a probe into the incident.

He was 54 and is survived by his wife Rohiqa, elder brother Shapoor Mistry and other family members.

Mistry’s death comes barely two months after his father, Pallonji Shapoorji Mistry, the Chairman Emeritus of the Group, passed away, aged 93, on June 28 in Mumbai.

Deputy Chief Minister Devendra Fadnavis has ordered a detailed probe into the incident that shook the country’s corporate world.

According to police, the tragic end came after Mistry’s vehicle, with at least 3 others travelling with him from Ahmedabad to Mumbai, crashed into a road divider around 3.15 p.m.

According to Palghar police officials, Mistry was travelling from Ahmedabad to Maharashtra when his over-speeding car hit a highway road divider on River Surya near Charoti, around 105 km north of Mumbai.

There were four people in the car out of which two, including Mistry, succumbed instantly to injuries in the road crash which left the vehicle badly damaged, while the driver has survived, said the police.

The other two injured, whose identities are not clear, have been admitted to the Rainbow Hospital in Kasa.

The police have termed it as an “overspeeding case” which may have resulted in the devastating accident, especially since Palghar and surrounding regions have been battered with heavy rains since Saturday.

The news sent shockwaves in Indian corporate and political circles and many reacted with initial disbelief.

In a condolence tweet, Prime Minister Narendra Modi said: “The untimely demise of Cyrus Mistry is shocking. He was a promising business leader who believed in India’s economic prowess. His passing away is a big loss to the world of commerce and industry. Condolences to his family and friends. May his soul rest in peace.”

Chief Minister Eknath Shinde expressed shock at the tragedy and said Mistry’s demise is a loss not only to his family but also the country’s industrial world.