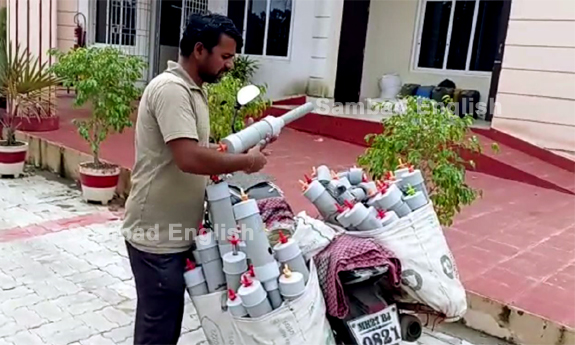 Bhubaneswar/Cuttack: A hawker was arrested today from Trisulia locality on the outskirts of Cuttack by Barang police for selling countrymade carbide cannons as toys, meant to be used by kids.

The man was identified as Anil Manikrao Chauhan. He is a permanent resident of Sirkutni village under Ashti tehsil of Wardha district in Maharashtra and has been temporarily staying in Odisha.

According to the source, Anil Manikrao was nabbed while the hawker was showing demo of the carbide cannons to passersby near Trisulia Square. The cannons were made of plastic pipes with a gas lighter attached to it at the rear. After putting few pieces of calcium carbide in the plastic cannon and adding water to it, the man used to press a button of the gas lighter, thereby causing spark.

In a closed attachment of the cannon, the chemical compound was making blast sound.

As many as 55 plastic cannons, around 500 gram of calcium carbide kept in a plastic container, a bottle with water in it and a motorcycle (bearing registration number-MH-27 BJ-0821) was recovered from the possession of arrested Anil Manikrao, a senior police official in Barang station expressed.

Police have registered a case in this connection and launched a probe, which is underway.

On the other hand, police cautioned people against use of such explosive compounds and urged to inform immediately, in case anyone is seen illegally selling carbide cannons in nearby areas.

It is pertinent to mention here that calcium carbide is not safe for handling by children.

The chemical compound is mostly used for industrial purposes, but with ample precautions.

Although, calcium carbide is not volatile and not soluble in any known solvent, yet it reacts when comes in contact with water to yield acetylene gas and calcium hydroxide. As the acetylene gas that forms upon contact with water is flammable, the substance is listed in hazard class 4.3. Calcium carbide reacts vigorously with even meager traces of water, releasing a large amount of heat.