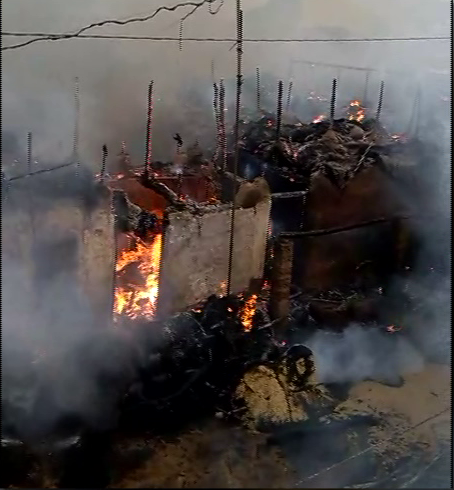 In a shocking incident, two women were charred to death in a major fire outbreak in Gadadharpur village of Chainpur panchayat under Athgarh block in Odisha’s Cuttack district today.

While one old woman identified as Chaya was burnt alive in the fire, another woman who had sustained critical burns succumbed to her injuries at the Sub-divisional hospital at Athgarh.

The fire that broke out in the afternoon engulfed the entire village reducing 80 thatched houses to ashes. Property worth lakhs have been reported destroyed in the fire.

Four fire tenders and firefighting personnel from Athgarh, Tigiria, Baramba and Arati Steels have been pressed into service to douse the fire.

While the fire has been contained, the exercise to extinguish it was on at the time of filing of this report.

Athgarh deputy collector, local tehsildar and other officials of the Revenue department are present on the spot overseeing the operations.

Since all the houses have been reduced to ashes, the administration has made arrangements at the school building at Chainpur for providing temporary shelter to the villagers.