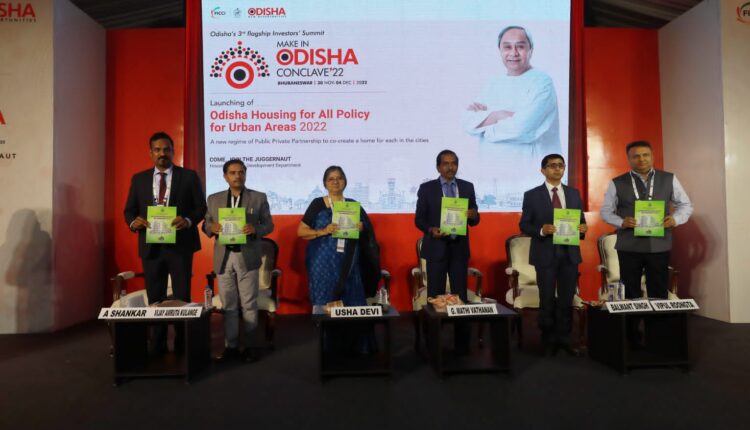 Bhubaneswar: The sectoral session on real estate and urban infrastructure was organised by the Housing and Urban Development (H&UD) Department on the fourth day of Make in Odisha Conclave-2022 at Janata Maidan here today.

The theme of the session was ‘Building next-gen Real Estate’. Investors and officials from the H&UD Department were present at the session.

Odisha Housing for All Policy for Urban Areas, 2022 was launched and a white paper titled ‘Emerging hotspots of Odisha towards Inclusive Growth’ was unveiled on the occasion.  The white paper highlighted the initiatives of the state government to boost real estate sector in Odisha.

Investment intents worth Rs 58,502.55 crore were made by 22 potential investors as they signed MoUs with state government for future investments.

In her inaugural address, H&UD Minister Usha Devi said, “Today, we are witnessing radical changes in the real estate sector, thanks to the progressive and proactive policy reforms introduced by H&UD Department, including Uniform Building and Planning Standards Rules, Housing for All Policy and CAF Rules. As part of the ‘ease of doing business’ and 5T interventions of the state government, e-governance services such as ‘SUJOG’ and ‘House Allotment System’ have been implemented successfully to ensure enhanced citizen satisfaction.”

While delivering the keynote address, H&UD Department Principal Secretary G Mathi Vathanan highlighted the efforts of the state government to introduce favorable policy frameworks for promotion of affordable housing in the state.

“The ‘Developers’ Area’ for commercial development under the PPP model of affordable housing has been increased from 35 per cent to 60 per cent which is the highest in the country. The allotment for EWS and LIG houses are done end-to-end through a robust online House Allotment System to bring accuracy and to make the allotment system hassle-free,” he said.

“With dynamism in policy and practice, we amended our policies from time to time for encouraging real estate partners. We are giving 7 per cent FAR which is highest in the country. We intend to be partners in progress with all of the developers for real estate and urban infrastructure across the state,” he added.

According to him, the H&UD Department is focusing on the universal growth for all 115 urban local bodies (ULBs) in the state. Odisha is the only state to implement 24X7 drink-from-tap service, he said.

“We want our cities to be destinations of future. With improved civic amenities and transparency in service delivery, Odisha is scripting new milestones in urban governance in the country. When we call ‘Mo Sarkar’, it means ‘Your Sarkar’. The Odisha Model of Governance tries to ensure happiness through services and welfare,” he added.

In his welcome address, Bhubaneswar Development Authority (BDA) Vice Chairman Balwant Singh said, “As a city, Bhubaneswar is smart, modern and yet culturally rich. We are inclusive in our plan and policies. We give priority to children, women, PWD, beggars, homeless and other marginalised communities in our efforts and initiatives.”

The inaugural session was followed by a panel discussion on ‘Real Estate and Urban Infrastructure: Unlocking Opportunities in Odisha’, which was chaired by Mathi Vathanan and co-chaired by Odisha State Housing Board MD Sagarika Pattnaik.

“There is immense potential in cities like Bhubaneswar, Cuttack and Puri which needs to be explored by private sector,” Mathi Vathanan said.