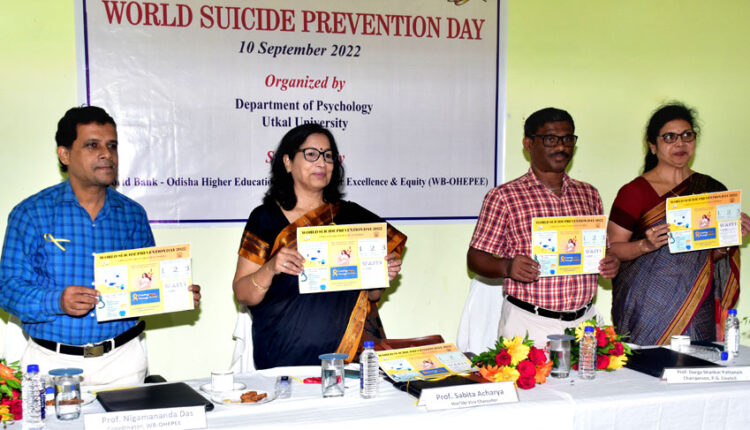 Bhubaneswar: Despite increased awareness, the number of suicide cases has been rising. Students and youths should be made aware of the real-life situations through general conversations to make them mentally strong, said Utkal University Vice-Chancellor Prof Sabita Acharya here today.

Inaugurating a function to mark the World Suicide Prevention Day organised by the varsity’s Psychology Department, Acharya said that conducting awareness campaigns at colleges and universities on suicide prevention and sensitising the students is of vital importance.

Explaining that tolerance sensitivity is decreasing among youths and students, the Vice-Chancellor said it is the main reason for increasing suicide cases among youths in the present day society.

As per a report, suicide case in Odisha has marked an increase of 20.20 per cent over the last five years. The current suicide rate in Odisha is 12.5 per cent against the national average of 12 per cent. The highest suicide rates are seen among teenagers and adults between the age group of 25 to 35 years.

Suicide still remains one of the leading causes of death worldwide. As per World Health Organisation (WHO)’s latest estimates, one case in 100 deaths is death by suicide. Apart from India, suicide rates are also high in USA, South Korea and other countries, said professor and coordinator of Odisha Higher Education Programme for Excellence and Equity (OHEPEE) Dr Nigamananda Das.

Chairman of PG Council Prof Durga Shankar Pattanaik said, “Living is the solution, suicide is not. Failure, stress, frustration and hopelessness are not reasons to take one’s own life.”

Speaking about the role of a family in preventing suicides, the Chairman said that if family members are attentive, then they can observe major behavioural changes in people prone to suicide. They suffer from depression, become moody and lose appetite and interest in daily things, Pattanaik added.

The theme for World Suicide Prevention Day from 2021 to 2023 is ‘Creating hope through action.’

The objective is to instill hope in people, reminding them that suicides won’t solve any problem. “Suicide is not the last option available to difficulties in life. The main aim of observing World Suicide Prevention Day is to inform people that there are alternatives to suicide and this hope should be given by family members and friends,” Head of Psychology Department Dr Bhaswati Patnaik opined.

Vote of thanks was proposed by Assistant Professor of Psychology Department Mousumi Sethy and the programme was coordinated by PR Media Cell. On the occasion, 13 departments participated in art competition while 7 departments took part in skit competition.