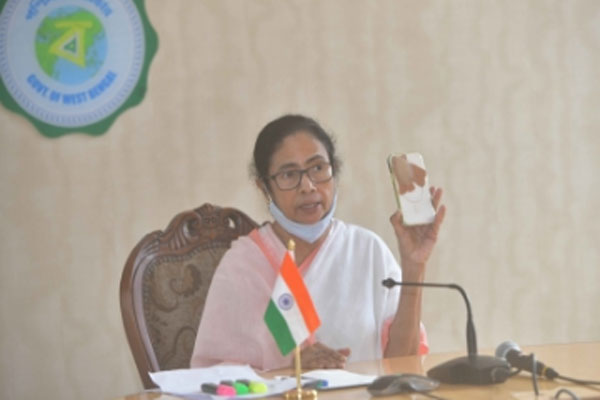 Kolkata: Hours before going to Delhi, chief minister Mamata Banerjee threw open a challenge to the BJP government at the centre by announcing an enquiry commission that will look into the ‘widely reported’ issues of illegal hacking and monitoring of mobile phones of various persons in the state.

The formation of the two-member commission was approved at the special cabinet on Monday afternoon.

Speaking on the occasion, the chief minister said, “The cabinet has approved the appointment of a commission of enquiry consisting of Hon’ble justice M.B. Lokur, retired judge of the Supreme Court of India and Justice Jyotirmoy Bhattacharya, retired chief justice, High Court, Calcutta, in exercise of the power conferred by section 3 of the commission of Enquiry Act 1952 in the matter of widely reported illegal hacking, monitoring, putting under surveillance, tracking recording etc of mobile phones of various persons in the state of West Bengal”.

“From judges to journalists, from politicians to bureaucrats, police and everyone is now under the surveillance of the Pegasus. The Parliament session is going on and I thought that the Centre will investigate into the thing under the guidance of the Supreme Court but I felt the Centre is not at all concerned about the whole thing and so West Bengal becomes the first state in the country to constitute a commission of enquiry which will look into the whole issue independently and impartially,” the chief minister said.

Urging the two members of the commission to take their responsibility quickly and start the inquiry, the chief minister said, “If someone is asleep, one will have to take the initiative to awaken the person”.

Political experts are of the opinion that the move just before going to Delhi, where she will meet Prime Minister Narendra Modi and is likely to meet the major leaders of the opposition, is significant. “The political parties should come forward and unite to fight against the autocratic attitude of the central government. The formation of the commission is a strong signal that Trinamool Congress is ready to take the fight directly to the BJP camp and is making a positive effort so that the other political parties come forward and join hands with TMC,” a senior Trinamool Congress leader said.

Chief Minister Mamata Banerjee will be arriving in Delhi on Monday evening and will stay there for the next five days. This is her first trip to the national capital after returning to power in West Bengal for the third consecutive term. The Trinamool Congress supremo is scheduled to meet Prime Minister Narendra Modi later this week during the visit. With the monsoon session going on, Banerjee is also likely to visit the parliament and meet several political leaders during her stay. She will also have discussions with the party’s members in both the Houses of the parliament.

Inform us if you suspect you are a Pegasus victim: SC probe…