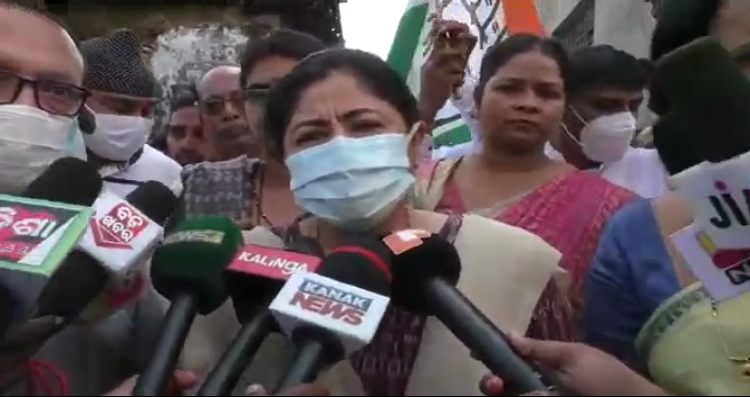 “The Minister of State (Home) should be removed first to carry out a fair probe into the murder case,” the chief of Congress’ women’s wing told the media after meeting family members of Mamita Meher at Jharni village under Tureikela Block in Balangir district today.

She said that the murder was pre-planned and a big racket was being operated in the educational institution.

“A big name has surfaced in the case that may put the State Government in the dock. I won’t feel reluctant to say that Minister of State (Home) was behind unethical activities in the college. Why the minister was visiting the college very often,” D’Souza asked.

Questioning the regular visit of Minister Dibyashankar Mishra to the college, she said, “If the Home Minister of the State will be involved in such act, how the citizens will feel safe?”

“The way the woman schoolteacher was murdered and her body was burnt it suggested that the accused persons have crossed all limits of evilness,” the woman leader said by calling the administration as ‘Jungle Raj’.

“The Home Minister should be taken into custody and grilled as to why he was visiting the college on regular basis,” she said.

The Congress and BJP leaders targeted the BJD Government in Odisha demanding removal of Dibyashankar Mishra as the minister after Mamita’s body was found buried underground at an under-construction stadium near Sunshine Public School in Mahaling of Kalahandi district on October 19.

The opposition parties leveled serious allegations against Mishra stating that he was behind the murder of Mamita Meher.

Mamita Meher, a young schoolteacher at the Sunshine Public School, Mahaling, was missing since October 8. Her body was found dumped underground at an under-construction stadium of the school 10 days after her disappearance. Govind Sahu, who is the President of the Managing Committee of the private school, was apprehended on the same day later in the evening, on charges of murder. The accused also confessed to crime before the police and revealed under which circumstances he killed Mamita and disposed of the body.