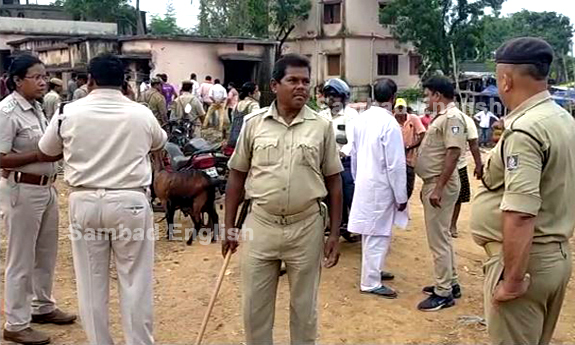 Baripada: An elderly man, who belongs to a particular community, cremated a dead calf inside a primary school premises near Poda-Astia Square on the outskirts of Baripada town in Mayurbhanj, today.

However, tension triggered after news of the incident spread in the locality. Residents caught hold of the elderly man and severely thrashed him. Following which, three platoons of police force were deployed to avoid any untoward incident, a senior official in local police station stated.

According to the senior official, the accused resides near the primary school. A thick layer of smoke covered the school after the dead calf was cremated. Hundreds of residents gathered in the educational institution and strongly resented the act. Forcibly, the accused man was brought to the school premises. An altercation erupted between the accused and many residents manhandled him.

Later, the elderly man apologised before the locals for his alleged mistake.

On the other hand, local police have launched a probe into the incident.