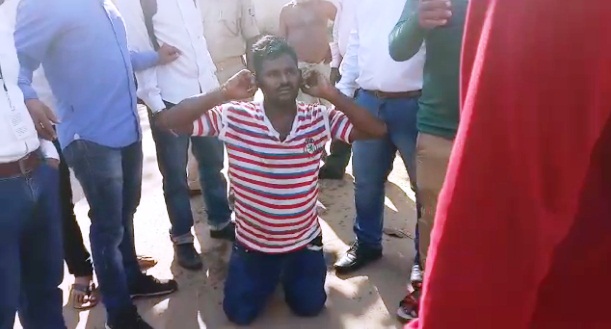 Bhubaneswar: A youth was forced to kneel down by some students of Utkal University in Odisha capital after he allegedly passed lewd comments at a girl student inside the campus. The incident took place yesterday and came to fore after a video of the act went viral.

Saheed Nagar police later detained Sushant Sethi, the accused and a resident of Bhoi Nagar here, after the girl lodged a complaint in this regard.

According to reports, Sushant, while roaming near ladies hostel no. 2 of the university yesterday, passed lewd comments at the student.

Some fellow students soon reached the spot and nabbed him. They later forced him to kneel down and apologize for his behaviour. Punishment for the wrongdoer didn’t end there as they forced him to cover the distance from the spot to the police station on his knees.

The complainant also alleged that he had been troubling her for a while.

Must watch: This video of Rourkela will leave you awestruck!