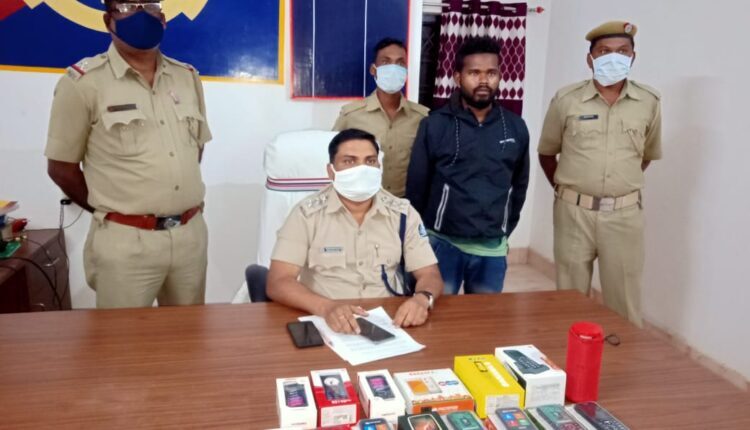 Chandahandi: The police today arrested a man for his alleged involvement in stealing 30 expensive mobile phones after breaking open a mobile shop in Chandahandi area of Odisha’s Nabarangpur district. The accused was forwarded to the court following his arrest.

Some miscreants late last night broke open the shutter of a mobile shop located in front Chandahandi block office and looted 30 mobiles and some other accessories.

Based on a complaint filed by the mobile shop owner, Mohammed Sahil, the Chandahandi Police registered a case under Sec 457/380 of IPC and launched a probe. After securing the footage of CCTV cameras installed in the shop, the police identified the looters.

Today a team of police personnel raided the house of one Abhimanyu Majhi in Pujariguda village and recovered stolen items including 14 mobile phones. During questioning Abhimanyu confessed to the loot and revealed the identity of his associate.

A senior police official said the other accused will be nabbed as well as other stolen items will be recovered soon.

After the Umerkote First Class Magistrate rejected the bail plea of Abhimanyu, he was sent to jail, the police official informed.

Worth mentioning, Abhimanyu was recently released from jail following his arrest in connection with ganja smuggling in Deobhog of Chhattisgarh state.