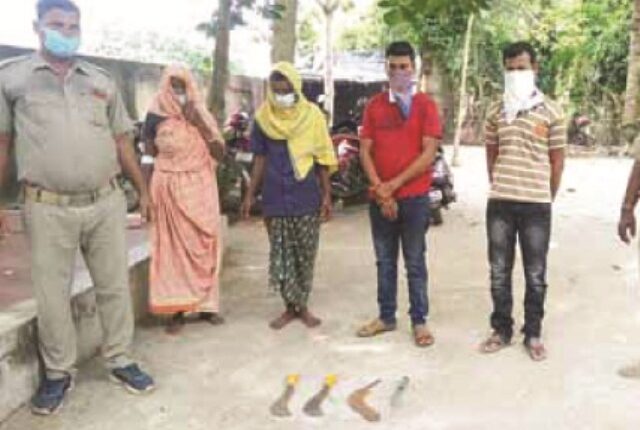 Jajpur: A man lost his life in a murderous attack allegedly by daughter’s in-laws for protesting physical assault on his daughter.

The incident took place at Anyasipur village under Bari police limits in Odisha’s Jajpur district. The deceased has been identified as Kalandi Sethy.

According to reports, Santosh Sethy of Anyasnipur village had a love marriage with Kalandi Seth’s daughter Mamata Sethy of the same village last year and started living in Ramachandi village under Khordha Sadar Police Station. A few days after their wedlock, the couple fought with each other and decided to return to their home in Jajpur district. On September 20, while they were coming back to their village, Santosh left Mamata alone at a local market on pretext of buying sweets for home.

Unable to find husband, Mamata went to in-law’s house alone, but they did not allow her to home following which she approached the police. On police intervention, Mamata entered into the house. When the police left the place, her in-laws including father-in-law Babaji Sethy, mother-in-law Mahuli Sethy, brother-in-laws Malay Sethy and Basant Sethy assaulted her physically.

On receiving information about it, Kalandi Sethy reached his daughter’s in-laws house and protested the assault on her. Fumed over his intervention, Mamata’s in-laws attacked him together with sharp weapons. The villagers rescued the victim in a pool of blood and immediately rushed him to the Bari Community Health Centre. While he was being shifted to the SCB Medical College & Hospital in Cuttack on September 23, he succumbed to injuries on the way.

On the other hand, Mamata’s in-laws had fled from the village following the incident. Based on allegation by Kalandi’s wife Rangabati, a case was registered against all the accused persons under section 307 of IPC.

Three-four teams of police led by Bari IIC Ajay Kumar Jena apprehended all the accused persons after conducting raid at different places on September 26 and seized the weapons used in murder. The accused persons were forwarded to the court on Sunday.