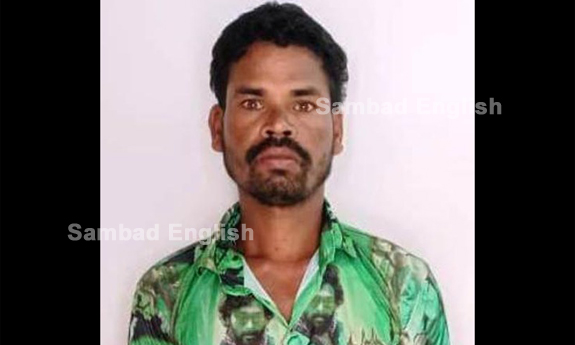 Kaptipada/Salachua: A man allegedly killed his friend on October 3, 2022 at Kathachua village under Sarat police limits and Kaptipada block in Mayurbhanj district suspecting illegitimate relationship with his (the former’s) wife. The man was arrested today in this connection.

The arrested was identified as Ratana Samada and the victim as Lala Biruli, both from Kuntidiha village of Panasadiha panchayat under Anandapur police limits of Keonjhar district.

According to a senior official in Sarat police station, Ratana earlier decided to eliminate Lala forever and brought the friend to his (the former’s) father-in-laws’ house in Kathachua village on October 1, 2022. He attacked the friend, all of a sudden, with a plank on the intervening night leaving the victim injured. Later, he bludgeoned Lala’s face and head with a large stone leading to the latter’s death.

After Lala died, Ratana dragged the deceased’s body to a nearby river and threw into it.

Some locals spotted Lala while floating on the river water the next morning and informed police about it. Sarat police reached the spot and fished out the body and sent it for post-mortem.

Sarat police previously registered a case (No-76, dtd-04.10.2022) in this connection and launched a probe. During interrogation, Ratana confessed to his crime before the probe team.

Police have recovered and seized the wood plank and stone, used to commit the crime, from Ratana’s possession. He was forwarded to a local court later in the day following his arrest, Kaptipada sub-divisional police officer (SDPO) Sarthak Ray informed.