Man loses motorcycle for betting on SP; Akhilesh Yadav helps him get new one 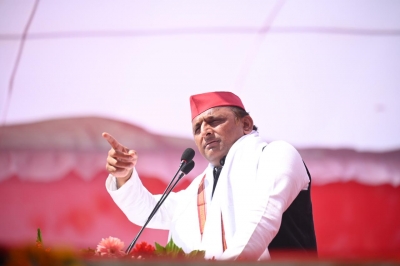 Lucknow: He lost a bet and his motorcycle but has now got a new one. Avadhesh Kushwaha of Uttar Pradesh Banda district had placed a bet with his neighbour Bilata Saini on February 6 that Samajwadi Party would form the government in Uttar Pradesh.

Bilata was confident that Chief Minister Yogi Adityanath would lead the BJP to victory again.

Avadhesh said that he would give his motorcycle to Bilata if the SP could not emerge victorious while Bilata announced that he would hand over his three-wheeler to Avadhesh if the BJP lost.

The two got a Rs 100 stamp paper, mentioning the details of the bet which was duly signed by six witnesses as well.

On March 10, the results were announced and living up to his commitment Avadhesh handed over his motorcycle to Bilata.

The next day, the incident went viral on social media when a local resident uploaded an image of the stamp paper with a small caption on how Avadhesh lost his bet and also his only source of livelihood.

When the information reached the SP president, Akhilesh Yadav, through his party cadres in Banda, he asked his leaders to bring Avadhesh to Lucknow.

On Monday, Akhilesh met Avadhesh at the party office in Lucknow and thanked him for reposing faith in the Samajwadi Party.

Akhilesh then handed him a cheque for Rs 1 lakh and told him not to indulge in betting in future.

A vendor by profession, Avadhesh sells small electronic items like phone chargers, charging cables and solar torches along with plastic items on his motorcycle.

His neighbour Bilata Saini owns a tempo which he drives himself to meet daily expenses.