MAN ON A ‘MISSION’ TO ‘INDIANISE’ EDUCATION 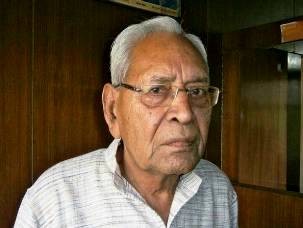 After getting American scholar Wendy Doniger’s book on Hinduism pulped, retired 85-year-old teacher and educationist Dinanath Batra, an admirer of Prime Minister Narendra Modi, has a new mission: preparing a “blueprint” for “Indianising” the country’s education system and liberating it from the clutches of western education.

Emboldened by the Gujarat government’s move to make his books supplementary reading in state-run schools, in one of which he has mentioned that modernisation of education should not mean westernisation but Indianisation and has asked students to take pride in their religion and its symbols, Batra said some “like-minded” academicians are already working on the blueprint.

“We have set up a commission Bharatiya Shiksha Niti Aayog which is preparing the blueprint for the Indianisation of the education system,” Batra, who has been in news lately, told IANS in an interview.

“It will take us three years to complete it and we will circulate it among people. Till now we have eight academicians in the commission and more will be included,” said Batra, who has courted controversy with his professed aim to “saffronise” the Indian education system, an initiative that has been praised by the RSS.

His books eulogize Indian culture and at the same time are dismissive of western culture.

He had earlier hit the headlines in March when DonigerÂ’s academically acclaimed book on Hinduism was withdrawn after Batra filed a civil suit against it.

Talking to IANS at the office of Shiksha Sanskriti Utthan Nyas in West Delhi’s Naraina Vihar, a non-government organisation in the education sector, Batra said: Â“Whatever is there in the NCERT book is not good. If the students read these books, they will go astray.

“Filthy language, abuses, and most depressingly unconstitutional words like Chamar and Bhangi have been used in the Hindi books of the NCERT (National Council of Educational Research and Training). Is it not distortion of Hindi language,” Batra asked.

“English poems (in Devanagri script) and Persian couplets in Hindi are there in the school books. It is a distortion of Hindi language,Â” said the mild-mannered octogenarian who seems oblivious of the debate he has generated.

Asked why India has been described as Akhand Bharat (United India) comprising Bhutan, Pakistan and Myanmar, among others, in one of his books, he flatly denied this and said: Â“This is not part of my book.”

“I am sending a rejoinder to the newspapers that have spread canards,Â” Batra told IANS.

“My books have teachings imbibed from Mahabharata and Ramayana which great historians like Romila Thapar describe as epics. The fact is that some portions of Ramayana are there (finally) in NCERT books,” Batra said.

Batra said it was the Gujarat government under the then stewardship of Modi that approached him for the translation of his books.

“I never asked Gujarat government to include my books in schools curriculum. They sought my permission to translate my books which I approved.”

Asked whether he was trying to please the Modi dispensation by showing his commitment to “Indianise” education, he said: “I have never met Modi nor Smriti Irani (Human Resource Development Minister).”

“What would I do by pleasing Narendra Modi? I have everything in life. My children are well settled and my daughter lives in Toronto in Canada,” Batra said.

However, Batra seems to be in awe of Modi.

“(Lal Krishna) Advani’s age is over and it is Modi, who seems to be promising a better future.”

Asked about his association with the Rashtriya Swayamsevak Sangh (RSS), with which the Bharatiya Janata Party has close ideological and organisational links, he said: “When I was 10 years old, I participated in some of the activities of the RSS. It does not mean that I am part of the RSS.”

RSS spokesman Ram Madhav has defended Batra’s work and praised him for ensuring that “Indian values are taught to our children”.