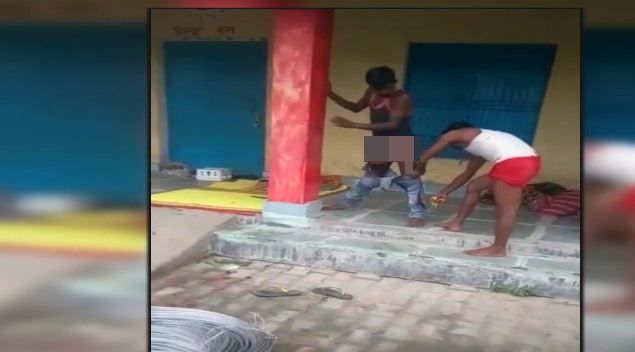 Mirzapur (UP): In an incident that has sent shock waves across the district, a man in Sikandarpur village in Uttar Pradesh’s Mirzapur district woke up to realise that a cobra had slithered into his jeans while he was asleep.

The incident took place last week but came to light after a video of the same went viral on social media.

Lovekesh Kumar, a labourer who was installing electricity poles and wires, had gone to sleep during lunch time and when he woke up with the cobra in his pants, he slowly stood up and held on to a pole.

Reports claim that Kumar stood holding the pole for almost seven hours till a snake charmer was called in.

The snake charmer cut open his pants and took out the snake.

Local officials and policemen also reached the village on getting information.

Meanwhile, Lovekesh Kumar told local reporters that, “I am a devotee of Lord Shiva and it was he who saved me. Though I was petrified, I remained calm and the snake did not bite me.”

He said that he will now fast on Mondays as a thanksgiving gesture to Lord Shiva.