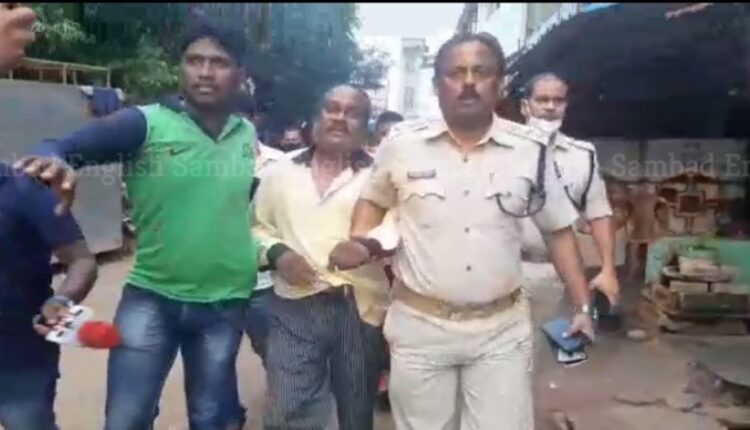 Khordha/Bhubaneswar: The Khordha Police today arrested ‘Manababadi Sangathan’ Chief Manas Das today afternoon for his alleged involvement in a murder case. He was picked up by a special team of the Khordha police from his residence at around 4 PM.

Manas courted controversy when a video showing some people thrashing a father-son duo from Kadaba village under Begunia police limits went viral. It was alleged the father-son duo was beaten up mercilessly by members of the ‘Manababadi Sangathan’ two months back in a house on the directive of Manas Das.

Later the police arrested Manoranjan Das, son of Manas Das in connection with beating up the father-son duo.

Besides, murder allegations were levelled against the ‘Manababadi Sangathan’ few days back.

Another complaint was lodged at Khordha Sadar Police Station against Manas Das today. The complainant claiming himself as stage bodyguard of Manas filed the FIR against the ‘Manababadi Sangathan’ Chief.

Narasingha Bhol, IG (Central) informed media persons Manas Das has been booked under Sec 302, 363, 364, 201, 120 b, 34 of IPC. Though Manas was not present at the crime spot, some persons murdered Satyabrata Naik of Abhimanpur village under Begunia police limits as per the directive of Manas last month. They murdered Satyabrata and torched his body to destroy evidence. Manas Das has been arrested on basis of evidence collected by the police team in connection with Satyabrata murder, the IG (Central) added.

Earlier, six persons were arrested in the murder case and have been forwarded to the court, Bhol said.

After Manas Das and son Manoranjan Das were produced virtually before the Khordha court, the father-son duo was sent to judicial custody for 14 days. They were taken to the Khordha Sub-Jail.