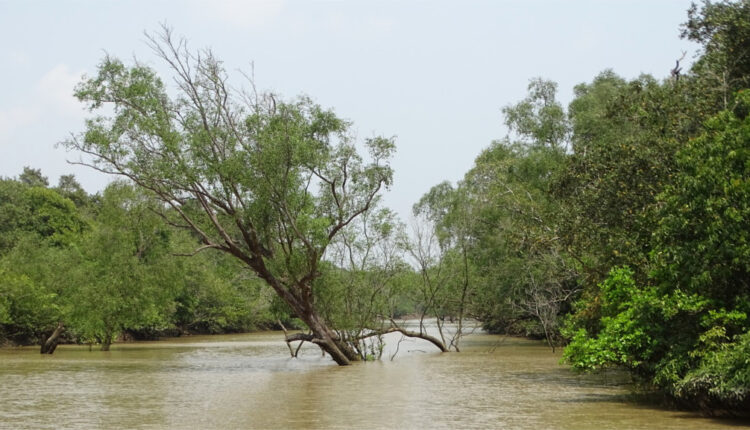 Kendrapara: Acting as a protective barrier, the mangrove forests in Bhitarkanika National Park withstood high-velocity winds and protected the area when cyclone Amphan barrelled through the Odisha coast, leaving a trail of destruction, officials said.

The tropical cyclone had triggered damage in coastal parts, but it had spared Bhitarkanika National Park and adjoining hamlets in Kendrapara district with lush-green luxuriant mangrove cover acting as protective barrier to nature”s fury.

Almost a fortnight after the cyclonic storm, the national park authorities have come out with brighter and cheering notes – the mangrove forest successfully withstood the wind velocity of the cyclone.

Because of the thick density of mangrove forest in Bhitarkanika, the flora and fauna of the park were unharmed due to the cyclone, said Divisional Forest Officer, Rajnagar Mangrove (wildlife) Forest Division, Bikash Ranjan Dash.

The villages on the close periphery of the national park were also saved as the mangrove cover acted as a buffer zone in protecting the human settlements, he said.

It is because of the mangroves that the coastal region including the national park could not be impacted by cyclone. In the 1999 super cyclone, the area was also saved as the species bore the onslaught of gusty wind. The mangrove is a proven and time-tested natural barrier against tidal surge and cyclones in these parts.

People in these parts have also realized the immense utility value of mangrove forest and are lending a helping hand to the forest department in the conservation of this tidal woodland. Mangrove forests with its intricate root system stabilize the coastline, reducing erosion from storm surges, currents, waves, and tides, the official said.

Bhitarakanika is one of the richest storehouses of mangrove genes. Researchers have come across 11 of the 70 mangrove species, which were at elevated threat of extinction in the world, in Bhitarakanika. Mangroves are regarded as natural barriers against the tidal surge and cyclones. Because of its rich mangrove cover, cyclonic storms from time to time have failed to make inroads into the wetland sites, he said.

Odisha with a mangrove forest area of 231 square kilometre with a major chunk of being in Bhitarkanika stands second only to Sunderbans in West Bengal. Besides Bhitarkanika in Kendrapara, the districts of Balasore, Bhadrak, Jagatsinghpur and Puri are also home to mangrove, otherwise known as coastal woodland, said another official.

“October 29-30, 1999-super cyclone had devastated large areas. However, our village was saved from natures fury as the standing mangroves trees acted as bio-shield. Since then, locals realized that mangrove is the lifeline for people living here. Locals here religiously adhere to the policy of protecting the forest”, recalled Pradeep Das, a resident of Dangamal village lying on the close periphery of the Bhitarkanika National Park.

The mangrove forest considerably reduced the wind velocity during 1999 super cyclone. It did so during cyclone Amphan that rolled past Odisha coast, he said.