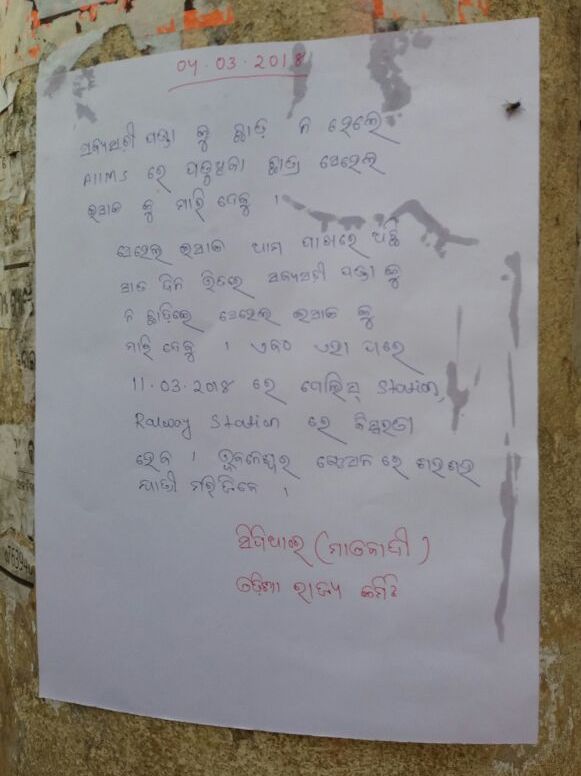 Bhubaneswar: A poster allegedly put up by the Maoists was found at Baramunda bus stand creating panic among locals here this morning.

The poster was put up on the wall under flyover with a message demanding the government to release top Maoist leader Sabyasachi Panda, who is currently lodged in jail, in seven days or else the Kashmiri student studying at Bhubaneswar AIIMS Suhail Aijaz, who is missing since Feb 9, will be killed.

The Maoists in the poster said that Suhail is in their custody. If the government fails to release Sabyasachi Panda, they will eliminate the Kashmiri student.

Also, the red rebels through the poster threatened explosions at Bhubaneswar railway station and police stations on March 11 if their demand is not met as soon as possible.

While there is no breakthrough in the missing Kashmiri student and a team of commissionerate police returned Bhubaneswar from Kolkata with clueless about him, the latest poster indicates Maoist link in connection with missing of Suhail, who is yet to be traced by police. The poster posed as a bigger challenge to the police, who are yet to clear the authenticity of the poster.

The twin city commissionerate police is investigating into the matter to find out alleged abduction of Suhail by Maoists and authenticity of the poster.

We recovered a handwritten poster and it is being investigated, said DCP Satyabrata Bhoi.

Normally, the Maoists put up the posters in their letterhead using red ink. However, this poster found at Baramunda bus stand was written in blue ink.

When asked to Sabyasachi Panda’s wife Subhashree alias Mili Panda about the poster, she refused any Maoist role behind putting up the poster at Baramunda bus stand.

She refuted the allegations that Sabyasachi’s supporters were behind the incident. She clearly said that her husband was never the cadre belonging to the banned CPI(Maoist), which has allegedly put up the poster on wall under flyover at Baramunda.

“Since my husband is facing trial and legal process in a series of cases, it is baseless to say that any of his supporters will do such thing to release him from jail,” Mili Panda said.