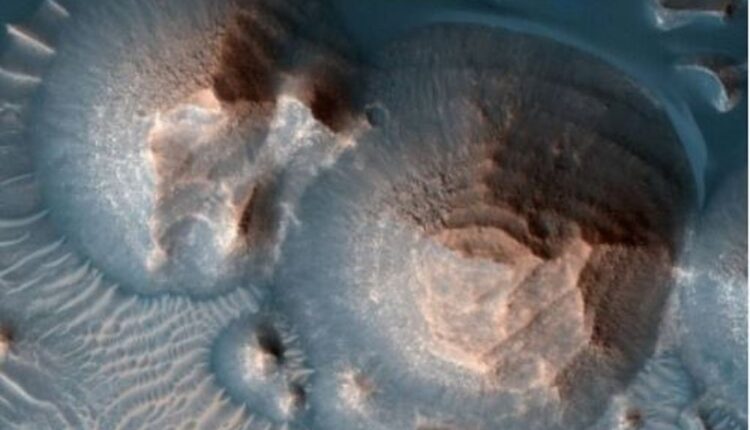 Spewing water vapour, carbon dioxide, and sulphur dioxide into the air, these explosions tore through the Martian surface about 4 billion years ago, according to scientists’ estimates, reported in the journal Geophysical Research Letters.

“Each one of these eruptions would have had a significant climate impact — maybe the released gas made the atmosphere thicker or blocked the Sun and made the atmosphere colder,” said Patrick Whelley, a geologist at NASA’s Goddard Space Flight Center in Greenbelt, Maryland.

“Modelers of the Martian climate will have some work to do to try to understand the impact of the volcanoes,” he added.

After blasting the equivalent of 400 million Olympic-size swimming pools of molten rock and gas through the surface and spreading a thick blanket of ash up to thousands of miles from the eruption site, a volcano of this magnitude collapses into a giant hole called a “caldera”.

Calderas, which also exist on Earth, can be dozens of miles wide. Seven calderas in Arabia Terra were the first giveaways that the region may once have hosted volcanoes capable of super eruptions, the team found.

The team’s analysis followed up on the work of other scientists who earlier suggested that the minerals on the surface of Arabia Terra were volcanic in origin.

A 2013 study was the first to propose that these basins were volcanic calderas.

“We read that paper and were interested in following up, but instead of looking for volcanoes themselves, we looked for the ash, because you can’t hide that evidence,” Whelley said.

The team used images from MRO’s Compact Reconnaissance Imaging Spectrometer for Mars to identify the minerals in the surface. Looking in the walls of canyons and craters from hundreds to thousands of miles from the calderas, where the ash would have been carried by wind, they identified volcanic minerals turned to clay by water, including montmorillonite, imogolite, and allophane.

Then, using images from MRO cameras, the team made three-dimensional topographic maps of Arabia Terra.

By laying the mineral data over the topographic maps of the canyons and craters analysed, the researchers could see in the mineral-rich deposits that the layers of ash were very well preserved — instead of getting jumbled by winds and water, the ash was layered in the same way it would have been when it was fresh.