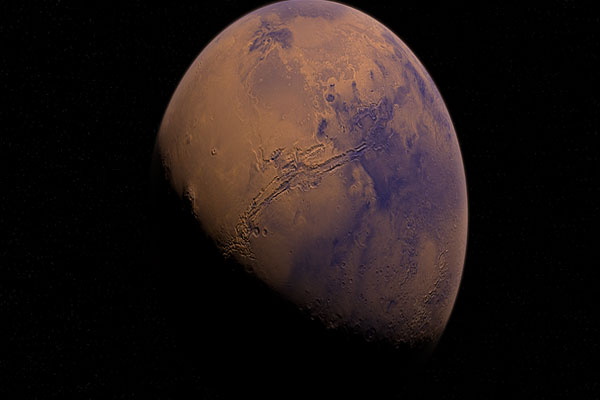 New York: Mars may be just too small to hold onto large amounts of water, essential for life to thrive on the Red Planet, according to a study.

While Mars has no liquid water on its surface today, remote sensing studies and analyses of Martian meteorites dating back to the 1980s posit that Mars was once water-rich, compared to Earth.

Researchers have proposed many possible explanations, including a weakening of Mars’ magnetic field that could have resulted in the loss of a thick atmosphere.

But a recent study, published in the Proceedings of the National Academy of Sciences, suggests a more fundamental reason why today’s Mars looks so drastically different from the “blue marble” of Earth.

“Mars’ fate was decided from the beginning. There is likely a threshold on the size requirements of rocky planets to retain enough water to enable habitability and plate tectonics, with mass exceeding that of Mars,” said Kun Wang, Assistant Professor of earth and planetary sciences in Arts and Sciences at Washington University in St. Louis.

For the study, the team used stable isotopes of the element potassium (K) to estimate the presence, distribution and abundance of volatile elements on different planetary bodies.

Potassium is a moderately volatile element, but scientists decided to use it as a kind of tracer for more volatile elements and compounds, such as water. The team measured the potassium isotope compositions of 20 previously confirmed Martian meteorites, selected to be representative of the bulk silicate composition of the red planet.

Using this approach, the researchers determined that Mars lost more potassium and other volatiles than Earth during its formation, but retained more of these volatiles than the moon and asteroid 4-Vesta, two much smaller and drier bodies than Earth and Mars.

The researchers found a well-defined correlation between body size and potassium isotopic composition.

“It’s indisputable that there used to be liquid water on the surface of Mars, but how much water in total Mars once had is hard to quantify through remote sensing and rover studies alone,” Wang said. “There are many models out there for the bulk water content of Mars. In some of them, early Mars was even wetter than the Earth. We don’t believe that was the case.”

The findings also have implications for the search for life on other planets besides Mars, the researchers noted.

NASA set to fly a mini helicopter on Mars