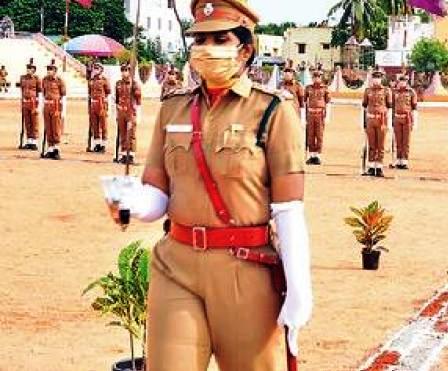 Chennai: The face mask of Armed Reserve Police Inspector N. Maheswari on Saturday more than safeguarding her from coronavirus covered her emotions while leading the Independence Day parade in Tirunelveli district.

Not many who were present at the V. O.Chidambaranar Stadium, where the parade was held, knew that Maheswari’s father Narayanaswamy had passed away the previous night at Dindigul district.

Masking her emotions, Maheswari majestically led the parade giving out her commands with her usual voice and presented the guard of honour to the District Collector Shilpa Prabhakar Satish.

It was only after leading her contingent out, a teary-eyed Maheswari left for her father’s place to attend his funeral.

According to her husband Balamurugan, they received the bad news on Friday night.

Maheswari decided to lead her contingent the next day as last-minute changes might have resulted in some confusion.