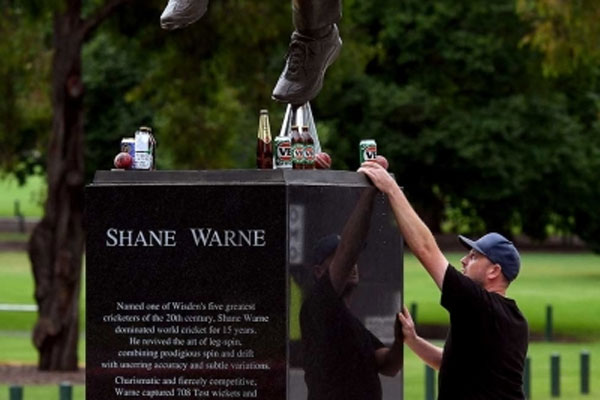 Melbourne: The iconic Melbourne Cricket Ground’s (MCG) Great Southern Stand will be renamed after legendary spinner Shane Warne, who passed away following a suspected heart-attack in Thailand on Friday at the age of 52, while the Victorian government “has offered a state funeral” for one of the greatest cricketers of all time.

A report in cricket.com.au said on Saturday that passionate cricket fans and people from other walks of life “laid flowers, meat pies and beer cans” at Warne’s statue at the MCG following the legend’s sudden death.

The report said that Warne’s manager, James Erskine, confirmed on Fox Cricket that one of the spinner’s friends performed CPR on him after finding the former cricketer unresponsive in his bed in a villa “after he was late rousing”.

He was taken to the Thai International Hospital in Koh Samui, Thailand but could not be revived, the report said.

“His family has been offered a state funeral by the Victorian and Commonwealth governments and fans have turned the Shane Warne statue at the MCG into a shrine. It was also announced the MCG’s Great Southern Stand would be renamed the S.K. Warne Stand,” said the report.

“Among the other offerings were a can of beer, a packet of cigarettes and a meat pie — a nod to Warne’s famously hard-charging lifestyle,” the report said.

Warne played a total of 145 Tests in his decade-and-a-half-long cricketing career, snaring 708 wickets. He was also a dependable lower-order batter, with a highest Test score of 99.

Meanwhile, Australia’s Foreign Affairs Minister Marise Payne has said that Department of Foreign Affairs and Trade officials had been in touch with those travelling with Warne and will reach Koh Samui later on Saturday.

“DFAT is working with Thai authorities to confirm arrangements following his passing, assist with his repatriation and provide other assistance on the ground,” Payne was quoted as saying in the report.

Do silver anklets have any body benefits?