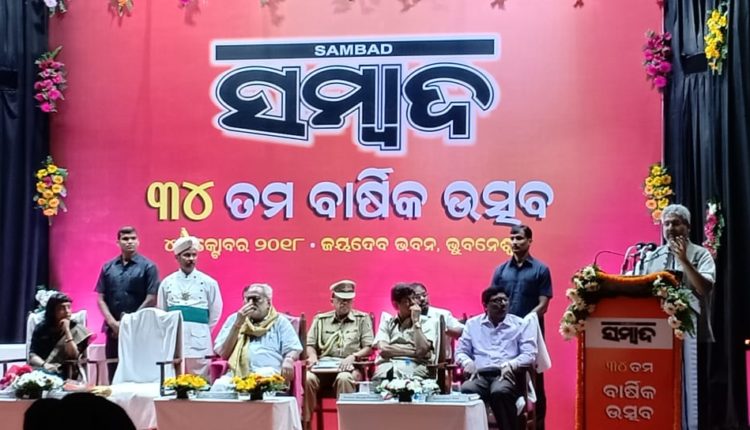 Bhubaneswar:  Noted journalist and Founder Editor of The Wire, an independent news website, Siddharth Varadarajan said media is the first line of defence for citizens and therefore it should focus more on highlighting real issues of the society.

Expressing concern over the way the Indian media functions now, the acclaimed journalist, who was speaking on the sidelines of 34th anniversary of Odisha’s Number-1 daily ‘Sambad’, said the media in our country is not doing what it supposed or must have to do.

“The Indian media should stop the portrayal of non issues as real issues and should view the responsibilities even more sincerely and earnestly. Today, a section of media, especially TV channels are praising people in power and running their propaganda instead of covering real issues facing common man in our society,” he observed.

The Delhi-based journalist further added that the most important issues in our country hardly given a good coverage both in print and Television journalism in these days. “The plight of farmers, the plight of workers and millions of young boys and girls who are struggling find employment is hardly discussed or debated in the media,” the London School of Economics alumnus pointed out.

Varadarajan, who has got numerous awards internationally and nationally for his fearless journalism, asked the youth, especially the budding journalists to pursue the profession without fear and prejudice.

Similarly, Odisha Governor Ganeshi Lal, who was the Chief Guest for the occasion, stressed upon media’s role and responsibilities in the society. “Sambad should keen on providing information to people in a free and unbiased manner and report the truth always,” the Governor added.

Sambad Chief Editor and Rajya Sabha member, Soumya Ranjan Patnaik, spoke on the occasion. “Today is a memorable and remarkable day for Sambad Parivar. Sambad and Kanak News were born on this date. Over the year, Sambad has become a No 1 newspaper in Odisha despite so many obstacles and we will strive hard to be always number one and ahead of others. And Sambad’s sister concern Kanak News has been able to make its mark as a popular channel in the state,” Patnaik said.

At the event, Monica Nayyar Patnaik, Managing Director of Sambad Group, thanked her colleagues and associates for their contribution to the paper’s 34-year long journey.

“After making our presence felt in print and electronic media in the State, now we are also on the cusp of repeating the same success in digital media as well,” Monica Nayar added.

Sambad Feature Editor Gourahari Das moderated the event and gave vote of thanks.

The journey so far:

Started on October 4, 1984, Sambad is now being simultaneously printed from nine locations in the state. It is the first newspaper in the State to introduce computerised photo-type setting, offset printing and color printing (which it did with its Sunday colour pull-out).

In the same year, monthly magazine Paurusha was revived and has been in circulation since then. Three years later, Odia literary magazine Katha began publishing. The monthly has been the most desirable for the readers. Ama Odisha— the corporate social responsibility (CSR) arm of the group primarily involved in voluntary blood donations and Odia language promotion was formed in 1996.

With private radio stations making waves, the group set up stations of Radio Choklate in Bhubaneswar and Rourkela in 2007. With the capital city turning into an education hub and an eye on backward integration, Sambad School of Media and Culture (SSoMaC) was set up in 2007 followed by Eastern Opera in the subsequent year.

Popular news channel Kanak News, www.sambadepaper.com, KMBB Engineering College were launched in 2009. In 2013, literature house Sahitya Ghara and www.odishasuntimes.com were dedicated to readers. In its endeavour to offer services of different taste, www.radiochoklateonline.com was launched where users can access their popular FM station online.

Less than a decade after venturing into FM radio business, the digital initiatives – www.sambad.in and www.kanaknews.com were launched last year. In addition to this, junior science college KMBB also began its student intake. The newest addition to the group EM Digital – a multi service operator was launched earlier this year.