Media not allowed for live coverage in Kerala Assembly 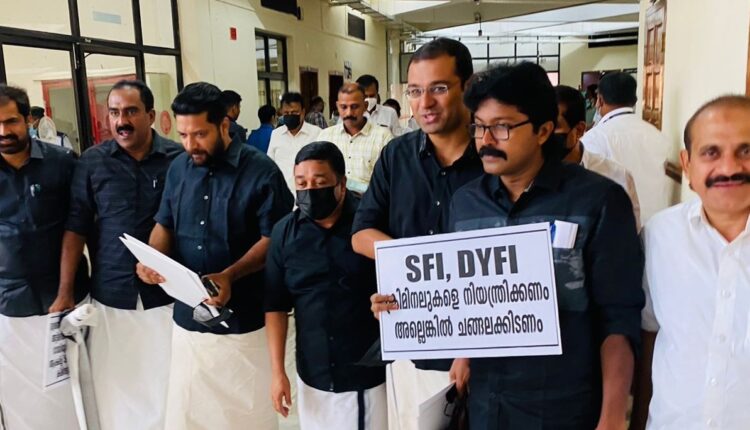 Thiruvananthapuram: In a never before seen procedure in the Kerala Assembly, Monday, the opening day of the new session, saw tumultuous scenes when the TV News Channels were asked not to cover the Question Hour live and the Opposition cried foul.

The TV media were told to use the video output provided by the Information and Public Relations Department. However, not a single visual of the protests by the Congress-led Opposition were shown, prompting them to launch a scathing attack on the Pinarayi government.

In the previous session on account of the Covid protocol the general consensus was the video output will be provided and it was used by the more than dozen TV channels and on Monday the same scenario was extended.

Apart from the blanking out of the opposition protest, strict protocols have been introduced that the media personnel will have to “stick to only their area and should not hang around in front of the Minister’s offices and also the office of the Leader of Opposition”.

Trouble began right from the start of Question Hour at 9 a.m. when six opposition legislators, dressed in black shirts and masks, displayed placards highlighting the vandalisation of the office of Wayanad Congress MP Rahul Gandhi.

The opposition benches were up in arms when the Question Hour began when State Excise Minister M.V. Govindan started to answer the questions.

But the Opposition started shouting slogans and in the din after 10 minutes, the Speaker M.B. Rajesh stopped the proceedings of the House and went to his chamber.

Senior media critic A. Sajeevan said, “It is extremely surprising that this is being implemented by the CPI-M government who all know what they were saying during the Emergency days.”

“This is nothing, but a blatant violation of media rights and this should never have come from the CPI-M, who often speaks about the freedom of speech and the rights of the media. This is not at all acceptable in a democracy and never at all from CPI-M,” said Sajeevan.

The entire opposition was outraged by the act of the Pinarayi Vijayan government and the Speaker.

The visuals of six opposition legislators arriving into the foyer of the Assembly was shot on the mobiles by them and later were given to the media.

After the ruckus, the Speaker’s office clarified and said it was an error of communication between the Watch and Ward staff.