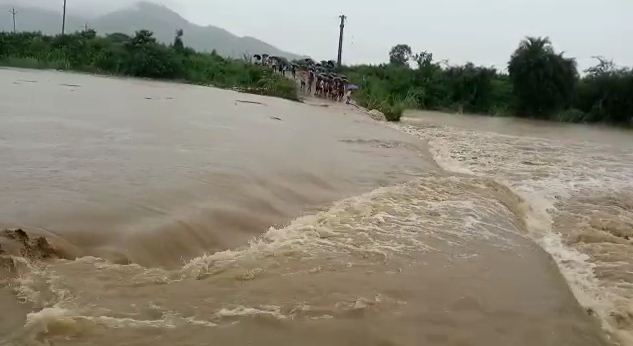 Bhubaneswar: Even as many rivers across Odisha are reportedly swelling following incessant rain, there is a possibility of medium flood in the Mahanadi River, informed Engineer- in- Chief, Water Resources Department.

Briefing a presser today, the top official said, “A medium flood in Mahanadi River is likely tomorrow after release of excess floodwater from Hirakud dam.”

He ruled out any possibility of flash flood in the river as the water level is decreasing in Hirakud reservoir.

Currently, the water level at Hirakud dam stands at 628.79 ft. The floodwater is being discharged through 28 sluice gates since yesterday.

The sluice gates will be closed as per an operating procedure by the dam authorities after reviewing the situation, the official said.

Speaking about the flood situation in Odisha, he said that five districts in coastal region are likely to be affected by the flood as the water level in Brahmani and Mahanadi Rivers rose due to incessant rainfall.

The water level in Brahmani and Mahanadi rivers may cross danger marks in places of Jajpur, Cuttack, Puri, Kendrapara and Jagatsinghpur districts.

“The water in Mahanadi River may increase to 7.50 lakh cusec. The floodwater discharged from Hirakud dam will reach Munduli in Cuttack district on Friday night. The water level of the river at Naraj is rising slowly,” the Water Resources Engineer-in-Chief said.

As many low lying areas in Kendrapara district and other coastal districts are reportedly inundated by rainwater, normalcy will return slowly.

“The floodwater will remain stagnant in low lying areas and will be released slowly. As the sea condition is tidal, the discharge of water is getting delayed. After lunar tide effect, the water will decrease automatically,” he told reporters.