Meet internet sensation Bhagwan Mali, a musician who lost his job and now winning hearts with violin on streets 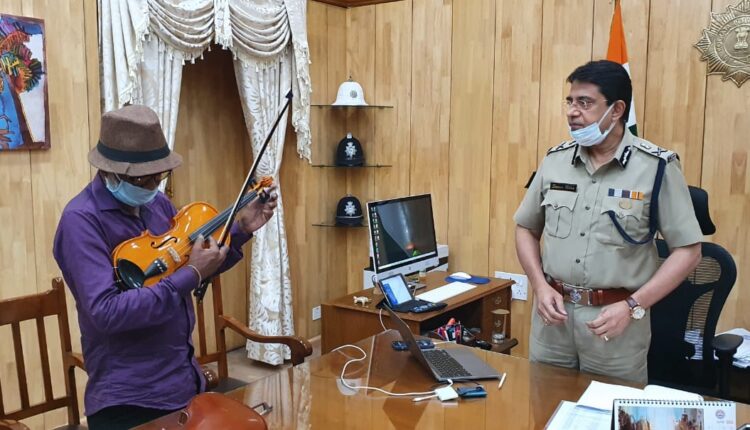 Kolkata: Like many others he lost his job during the lockdown but he took recourse to his artistic capability and impressed film director Raj Chakraborty and the Kolkata Police Commissioner with his violin. The newest Internet sensation Bhagwan Mali, an out-of-work hotel musician, is now hitting the streets and winning hearts in the city.

Mali, who originally hails from Gujarat, came to Malda during the Gujarat earthquake. He then moved to Darjeeling and Siliguri and started performing in the tourist hotels there. When the pandemic hit, he lost all his income.

“During last year’s lockdown I lost my job and at around the same time, my daughter, married and settled in Kolkata, was in an advanced stage of pregnancy. I had to move to Kolkata to take care of my daughter and because of the lockdown I couldn’t leave the city. Ever since my daughter delivered a baby, my wife and I have been living on the street as the one room in which our daughter and son-in-law live doesn’t have enough space for us,” Mali said.

It was then that he started to play music to make ends meet. The local police in the Burotolla area of the city have provided him a place to stay for now.

“Mali told us that he began performing on the streets to arrange food for himself and his wife. Whatever extra that he saved was spent in buying baby food and fruit for the baby and the mother. However, disaster struck yet again and Mali’s violin got damaged a couple of weeks ago,” a police officer of Burotolla police station said. That was when Burotolla police — and later the community policing wing — decided to step in.

Kolkata Police Commissioner Somen Mitra was so impressed with Mali that he gifted him a violin on Monday under the community policing scheme.

Meet Mr. Bhagwan Mali, who is a very talented musician.Few weeks ago, a video of him playing his violin in the city streets, had gone viral on Social Media.Last week, he was financially assisted by our Community Policing Wing. Today, @CPkolkata gifted him a new violin. pic.twitter.com/750lYhZX0x

Director Raj Chakraborty, who is also the Trinamool Congress MLA from Barrackpore, first noticed Mali playing his violin on June 21 at Beadon Street and Girish Park crossing. Impressed with his music Chakraborty got in touch with the local MLA and minister Sashi Panja and arranged for his food and medicine.

A video that has gone viral on the Internet shows Chakraborty speaking to Mali and offering him an opportunity in his film. Chakraborty also plans to give Mali a chance to perform in his forthcoming music reality show.

Mali, who has so far refused any financial help stating that he will only accept money after performing, has also been provided a roof over his head at Burotolla by the police.

“We have arranged some performances for him at some of the leading hotels and restaurant chains in the city. He has been performing for the past one week,” said a senior officer of Kolkata Police.

If you walk through the crossing of Beadon Street and Girish Park, you also might hear the magic melodies ‘Diwana Hua Baadal’ by Asha Bhosle and Mohammed Rafi from the 1964 movie ‘Kashmir Ki Kali’ and Lata Mangeshkar’s ‘Ajeeb dastan hai yeh’ from the 1960 movie ‘Dil Apna Aur Preet Parai’ floating on the empty streets of North Kolkata.

This octogenarian man who sits on the pavement with his violin to arrange food for his grand-daughter will surely make everyone forget the harshest realities with his magic melodies.

Bizarre! Man marries his son’s ex-wife in UP