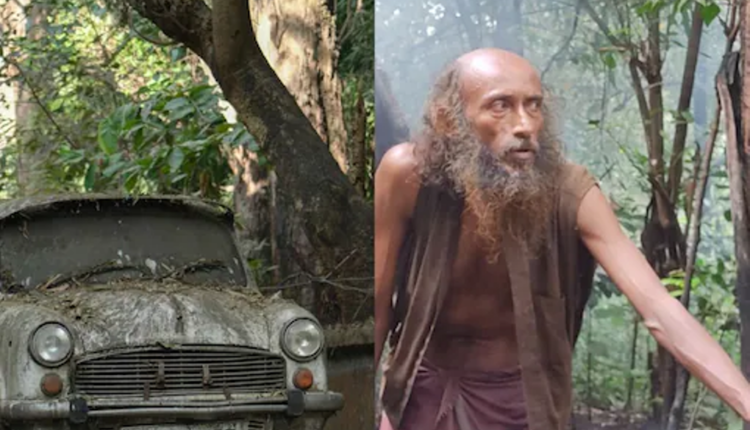 Dakshina Kannada (Karnataka): In what seems to be a similar haunting story of the Hollywood flick ‘Into the Wild’, where the protagonist finds life away from civilization and the lives off the forest in an abandoned vehicle, a real-life story of 56-year Chandrashekar, who is living in his Ambassador car amid dense forests, has come to light from Karnataka’s Dakshina Kannada district.

Chandrashekar has been living in a thick jungle region between Adtale and Nekkare villages in Arantodu taluk in Sullia taluk, which is about 4 kilometres into the wild.

He has been living along with wild animals, and become a part of it for over one-and-half a decade. He does not want to come back even as wild snakes always make their way into his car. He will promptly catch and leave them back into the jungle. “Human beings are more poisonous and dangerous than wild animals,” he says.

He has made his Ambassador car his abode, locks himself up in the car during nights and whenever he feels like resting. He has put up a plastic sheet on bamboo poles as the roof. The only connection with the outside world is a radio.

Chandrashekar though looks like more of a jungle man, shabby and unkempt, he has a soft heart. Soft-spoken Chandrashekar says he is an educated man and he feels that his land was auctioned in violation of the law by the bank authorities.

However, Aranthod Gram Panchayat administered the Covid-19 vaccine on Chandrashekar. During Covid times when the villages were shut, he survived by eating wild fruits in the forest.

He travels on his bicycle to villages to sell his baskets made of dried creepers in the forest. Until 2003, Chandrashekar lived like any other common man in the Nekral Kemraje village. He owned an areca nut farm of 1.5-acres. His life changed after he borrowed a Rs 40,000 loan from a cooperative bank. He maintains that he was misled and cheated by people around and as he could not repay the loan, his property from where he earned livelihood got auctioned.

Heartbroken Chandrashekar then went to his sister’s place, but somehow could not stay happy there as differences of opinion cropped up. One day he decided to retreat from the civilized world and drove in his car into the jungle and started off a new life in the wild.

Chandrashekar, though looks worn out, is leading a poised, self-sufficient life hoping that one day he will get back his farmland. He has kept all documents related to his farmland intact in the car.

Chandrashekar has not been troubled by the wild animals. During nights most of the wild animals, including elephants, doe, leopard, wild boars, and bison visit his abode. The officials of the forest department have also let him lead his life in the jungle. “I don’t even cut a small shrub, I don’t meddle with anything wild around me. I take a bath in rivulet that runs close to my place in the forest. I cook rice and listen to Hindi songs on Akashavaani,” Chandrashekar explains.