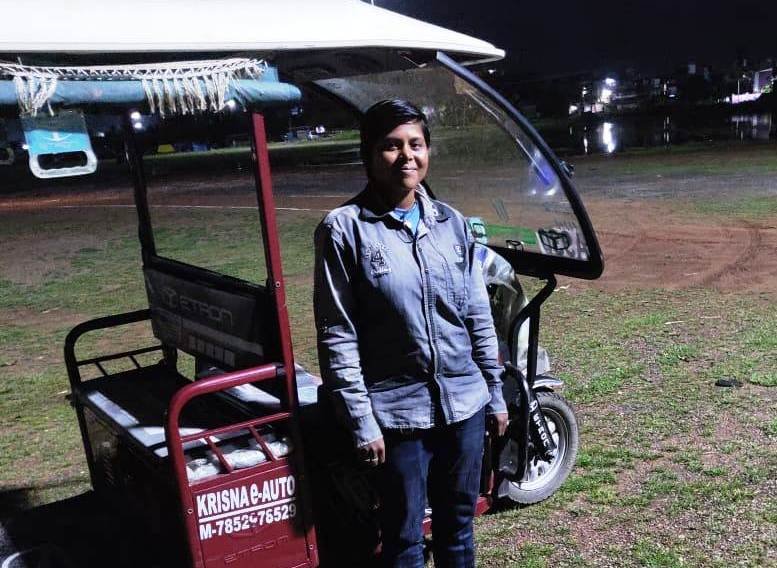 Puri: No work can be labeled as superior or inferior, rather the work itself is a dignity. A woman in Odisha having graduate degree proved this concept true by choosing driving an e-rickshaw as her occupation for livelihood.

Breaking the stereotype in male-dominated profession, Sunita Nayak has now earned recognition for herself as the first e-rickshaw driver with clearing her driving test recently following enforcement of new Motor Vehicles Act in Odisha.

Her dedication and efforts to achieve best in her profession even stunned the transport authorities during the test to obtain driving licence.

The officials’ praise for Sunita was reflected on the Twitter handle of the State Transport Authority.

“Sunita Nayak is the First lady to pass E-Rickshaw driving test at Puri today. She is a graduate in Hindi from IGNOU,” tweeted STA Odisha.

Sunita, the daughter of Trinath Nayak and resident of Markandeswar Sahi in pilgrim town Puri, set example for many especially for the job seekers and unemployed youth who opt to migrate other states in search of job with handsome package following completion of higher studies.

Without running after jobs for earning, the young girl preferred to work independently and to offer transport services to the commuters on her rickshaw at her hometown.

The woman, who was born and brought up in a poor family, could not afford to get enrolled at reputed educational institutions. However, she continued her study at IGNOU and successfully completed her graduation degree in Hindi after intermediate course.

With the degree Sunita did not want to dream for marriage, rather the youngest daughter of her father wanted to support her family financially. With help of her father, she bought a battery-operated auto-rickshaw and drove around the town, particularly on Grand Road area.

As she had no driving licence, she applied for it after implementation of MV Act in Odisha. As per the rule, she appeared in the test and cleared it successfully.

“I always wanted to work independently since my childhood and to prove myself by achieving something different from others. Now driving e-rickshaw is my occupation. With obtaining the licence, I will not face any obstruction in continuing it as my profession,” said Sunita.