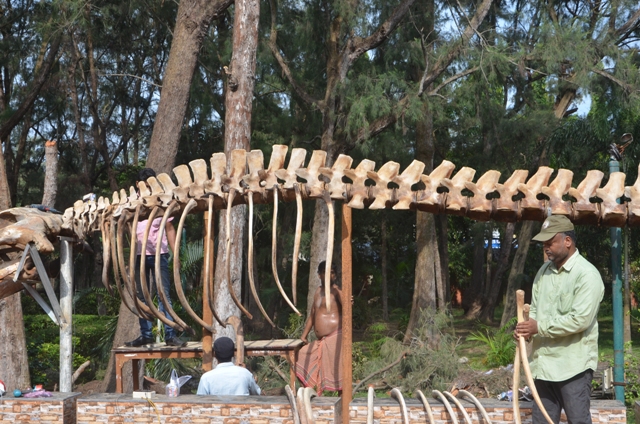 Bhubaneswar: A life hereafter may be an abstract concept or vice versa, but fitting skeletons of a dead species is undoubtedly a scientific technique that Shiv Prasad Parida has mastered in field of zoology.

Shiv Prasad Parida, a well known name among museum lovers in India. He has proved his mettle by fitting skeletons of five whales so far and placing those in the museums following a proper processing.

He started his skeleton joint project from Ganjam where he gave a complete shape of a huge whale rescued in 2007. Now, the 42-ft whale in skeleton form is put on display in CDA, Chilika.

A 47-ft whale was his next project to combine the skeletons by putting a chemical quoting. Following success of these projects there was no looking back for him. The 32-ft whale was his another achievement through chemical processing. These two skeletons have become the centre of attraction for the visitors at Regional Museum of Natural History (RMNH) at Acharya Vihar here.

With the success, he got opportunity to build a skeleton of a whale in Mysore.

Three months ago, he achieved success by arranging the bones of a 42-ft whale at Zoological Survey of India in Digha. The skeleton of the whale was buried in 2012. The bones of the whale were fractured during excavation in 2016. But, Parida placed the bones in order and gave a complete shape of the skeleton.

Recently, Ministry of Forest, Environment and Climate Change Additional Secretary Amita Prasad had felicitated Parida for his distinguished work and effort in fitting the skeletons of whales.

Although, he is yet to receive any recognition from Odisha government, he has earned honour outside the state for his projects.

He is not only well known as the man of whale skeleton, the skeletons of over 20 species including elephant, rhinoceros, Indian pangolin, deer, salt water crocodiles, dolphins and different types of birds placed in RMHN, CDA and Bhitarkanika museums are also part of his achievements.

However, the chemical processing of a dead whale is the toughest thing of placing and orienting the joints to create a shape of a skeleton, Parida said.

“One has to be extra careful while fitting the bones in an area with strong odor. While it takes years for chemical procession, the bones are arranged within six months for and bones are fixed in five-six days,” he said.

The scientific technique in fitting the skeletons is none lesser than an artisan’s work.