Meet this diehard fan of Big B from Odisha 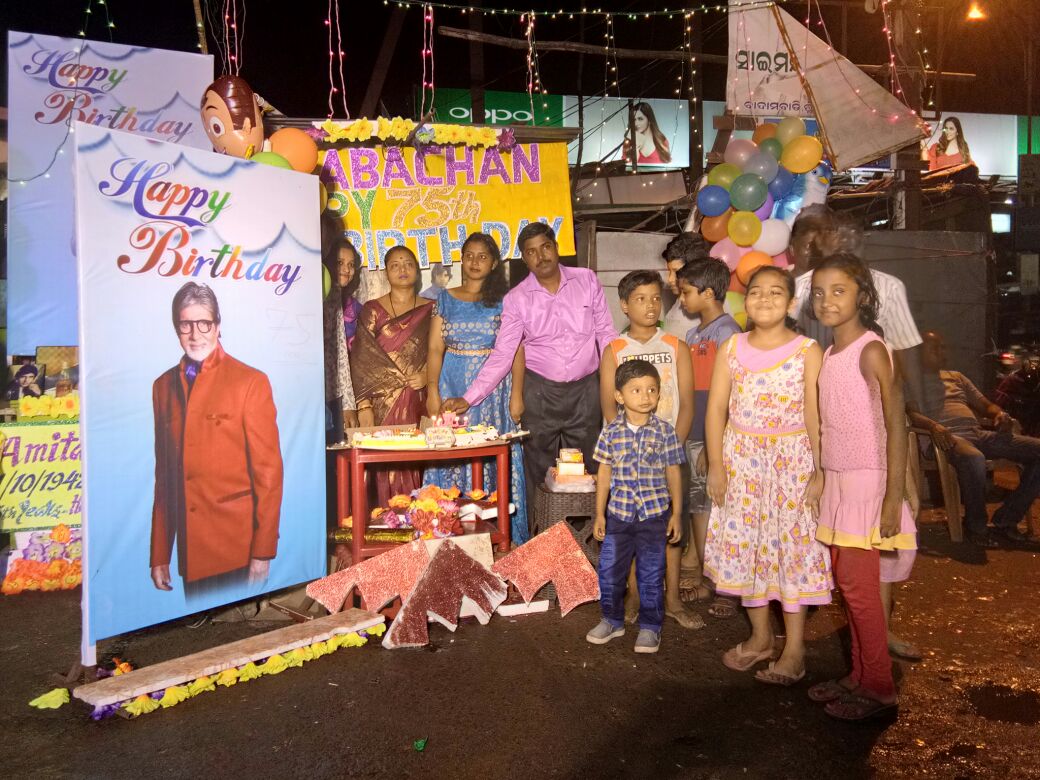 Cuttack: For Dhaneswar Sethi, a shopkeeper in Odisha’s Cuttack, Bollywood actor Amitabh Bachchan is much more than a star. It was evident as he spent around Rs 6,000 to celebrate the mega star’s 75th birthday today.

Sethi, who earns around Rs 2,000 daily, spent three days earnings at one go to prove that he is no less a big fan of the Bollywood’s Shahenshah.

Dhana Variety Store, owned by him, in Badambadi area of the Millennium City, was cynosure of all eyes as it was decorated with balloons and large cut outs of Bachchan and along with a huge standee with name of all films he acted in.

The shopkeepers wowed one and all by cutting a cake in presence of his family members, fellow shopkeepers and children to mark the occasion.

The shopkeeper, claiming to be a diehard fan of the actor, said he saves Rs 5 everyday to observe the day and he has been doing it for the last 11 years.

“I save Rs 5 daily to celebrate Amit Ji’s birthday in my shop and this time I have spent Rs 6,000 to buy balloons, posters and sweets for the occasion,” said Dhaneswar, a father of two.

Dhaneswar who has studied up to 7th standard only, turned a fan of the superstar after watching 1985 Bollywood action drama ‘Geraftaar’ starring Big B and Kamal Haasan and Rajinikanth.

“I fell in love with the actor after watching ‘Geraftaar’ with one of my friends in a theatre. Everything about him including his hairstyle, dialogue delivery, fights and of course acting made me to become his fan,” the 38-year-old said.

He decorated his shop with balloons and invited fellow shopkeepers of the locality, children and transgenders to make the occasion a special one.

“He (Dhaneswar) is a great fan of Amitabh Bachchan and celebrates his birthday ever year in his shop along with his family members,” said Tukuna Behera, who runs a garment retail outlet.

The diehard fan also says the occasion also marks the annual puja of his shop as he considers day is very auspicious for him.

Sethi says seeing his madness for the actor, his family members including his wife, daughter and son help him in the celebration.

Asked whether he has met the actor in person, the shopkeeper said he met the mega star once in 2010 at Bhubaneswar airport when the latter had come for a visit to Puri along with his family members.

“On his birthday, we are praying Lord Jagannath to keep him fit, healthy and so that he can continue doing films as long as he can,” wished Sethi.

He claims he has seen all of Big B’s films starting from Saat Hindustani to Sarkar 3.

Meanwhile, the 75-year-old actor took to Twitter to express gratitude and thanked his fans for all their love, support and wishes.

In one of the tweets, he wrote, “The affection of greeting for the 75th, displayed over several mediums, overwhelms me. a thank you shall never be enough.”

‘Naagin 5’ actor Sharad Malhotra: If I see anyone doing drugs on set,…

Mouni Roy: I am getting used to new normal