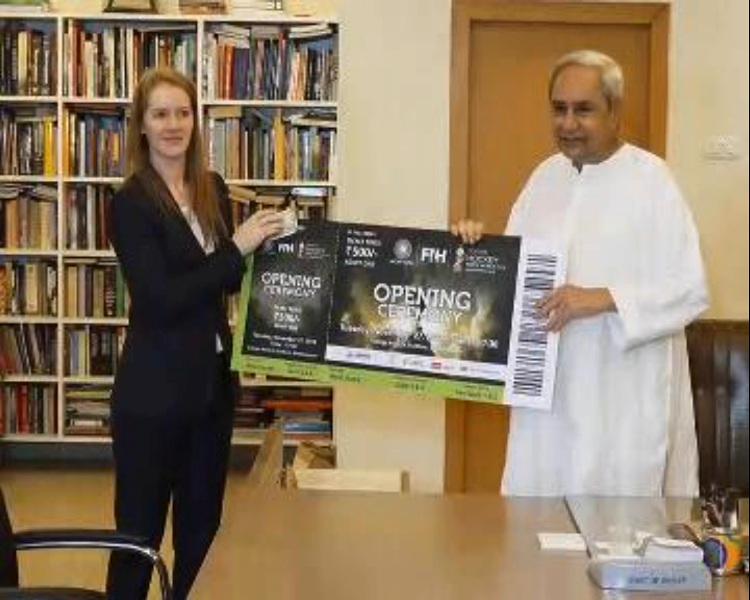 Bhubaneswar: With just nine days to go to commence the much-awaited Men’s Hockey World Cup at the Kalinga Stadium here, Chief Minister Naveen Patnaik today got the first ticket for the opening ceremony of the event at cost of Rs 500.

During a meeting, Hockey India CEO Elena Norman handed over the ticket for the opening ceremony of Odisha Hockey Men’s World Cup, scheduled from Nov 28 to Patnaik. He paid Rs 500 for the ticket.

The Hockey India yesterday has announced the date for the online sale of the opening ceremony of the international hockey event. The tickets will be available only online at http://ticketgenie.in/event/hwc-opening-ceremony from Nov 20 at 12.00 pm.

“The tickets will only be available for sale online. There will be no complimentary tickets, no passes. Like the honourable CM, everyone should go online tomorrow at 12.00 noon to make sure to purchase the tickets,” Elena told the media reporters after meeting.

The tickets will be sold at the entire stadium and it is approximately 12.00 hours to 6.00 pm. The release has been issued which has the online link, she said.

She urged fans not to go to the box offices as there will be no tickets for sale at the moment.

The stadiums are expected to be filled with thousands of fans to witness an outstanding performance by music maestro AR Rahman and Bollywood superstar Shah Rukh Khan at the opening ceremony of Odisha Hockey Men’s World Cup 2018.

In Pics: All you need to know about musical laser show at Odisha’s Bindusagar