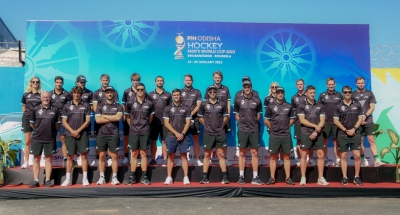 Rourkela: The men’s hockey teams from New Zealand and Malaysia received warm welcome at the Rourkela Aerodrome on Saturday as they arrived in the city to take part in the FIH Odisha Hockey Men’s World Cup 2023 Bhubaneswar-Rourkela.

Placed in Pool C with the Netherlands, Malaysia and Chile, Nic Woods’ side will play debutants Chile (January 14) and Netherlands (January 16) in Rourkela, before taking on Malaysia (January 19) at the iconic Kalinga Stadium in Bhubaneswar.

“The Birsa Munda International Hockey Stadium in Rourkela is massive, so, the noise levels are going to be a challenge for us during the matches. You can’t hear other players during the match which creates a bit of a problem, however, we are really excited to play in front of such a big crowd and will look to do our best in the tournament,” New Zealand player Nic Woods said.

Head coach Greg Nicol said that their only aim is to register big wins in World Cup and clinch the trophy.

“We came to Bhubaneswar not so long ago to play in the FIH Pro League and are excited to come to Odisha again for the FIH Odisha Hockey Men’s World Cup 2023 Bhubaneswar-Rourkela. The crowd here is fantastic and our team really enjoys playing in this atmosphere, especially in the World Cup. It’s a major tournament for our sport and hopefully, we can play well and get some wins,” he said.

“The players are excited to play in the new stadium. I heard the size of the stadium in Rourkela is pretty big. We will have a training session tonight to get used to the surface and the right feeling for the atmosphere around the stadium,” Nicol was quoted as saying by Hockey India in a release on Saturday.

Meanwhile, Malaysia will open their campaign against the Netherlands on January 14 and captain Marhan Jalil is confident of a good outing in the tournament.

“We are fully prepared for the World Cup and will look to do our best on the pitch. Our group is tough as we have teams like the Netherlands and New Zealand in it and it will be an uphill task to beat them. However, we have full belief in ourselves and the matches will be exciting for the players,” stated Jalil.

He said, “I think Hockey India has done well in hosting the FIH Odisha Hockey Men’s World Cup 2023 Bhubaneswar-Rourkela with the right infrastructure and facilities. We heard there is a new big stadium and are excited to play in it in front of a big crowd. Our team have a lot of quality and we will look to use it to win some big matches.”

Amid row over credit, Naveen thanks PM, Scindia for flight service to Rourkela