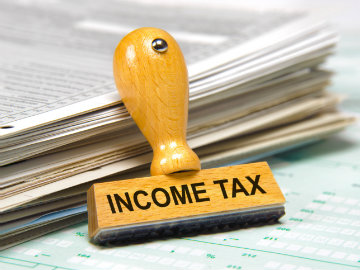 In a major relief to the tax-burdened middle-class people, Finance Minister Arun Jaitley on Wednesday proposed to halve the income tax to five per cent for those earning between Rs 250,000 and Rs 500,000 per annum.

Presenting the 2017-18 Budget in the Lok Sabha, Jaitley said he proposes to halve the income tax for persons earning between Rs 2.5 lakh-Rs 5 lakh from the current 10 per cent.

“This will reduce the tax liability of all persons with incomes below Rs 500,000 either to zero (with rebate) or 50 per cent of their existing liability,” Jaitley said.

The existing benefit of rebate available to the same group of beneficiaries is being reduced to Rs 2,500 that is available only to assessees up to an annual income of Rs 350,000.

According to him, the combined effect is that there will be nil tax liability for people with incomes of up to Rs 300,000 per annum.

While the tax liability of people with incomes of up to Rs 500,000 is being reduced to half, all other categories of taxpayers in the subsequent slabs will also get a uniform benefit of Rs 12,500 per person.

“The total amount of tax foregone on account of this measure is Rs 15,500 crore,” Jaitley said.

In an effort to somewhat make good the loss of revenue, Jaitley proposes to levy a surcharge of 10 per cent of tax payable on individuals whose annual taxable income is between Rs 50 lakh and Rs 1 crore.

The surcharge will generate additional revenue of Rs 2,500 crore.

The existing surcharge of 15 per cent of the tax on people earning more than Rs 1 crore will continue.

For those with incomes of up to Rs 500,000 — other than business income — Jaitley said a single-page income tax return form will be introduced.

“It is a populist budget for the middle class. The budget proposes to give relief to the middle class while taxing the super-rich,” Neha Malhotra, Executive Director, Nangia & Co., an international tax advisory and accounting firm, told IANS.

“It was a legitimate expectation post-demonetisation that the personal income tax rate will be reduced to soften the tax hit on the pockets of the individuals,” she added.

According to Malhotra, immovable property owners have been relieved by lowering the holding period for availing lower rate of long-term capital gains tax from three years to two years.

“Also, the base year for computing capital indexation benefit has been changed from existing April 1, 1981, to April 1, 2001. This move will give significant relief to the taxpayers earning profits from sale of house property and will encourage investments in the real estate sector,” she said.

Another woe of the taxpayers is that provisions applicable on dishonoured cheque under Section 138 of the Negotiable Instrument Act are ineffective.

New effective way to tackle the issue of bounced cheque is a welcome move which shall relieve those facing hardship on these fronts, she added. (IANS)

Drop in economic activity due to demonetisation is…

No questions if old notes deposited in one go: Jaitley