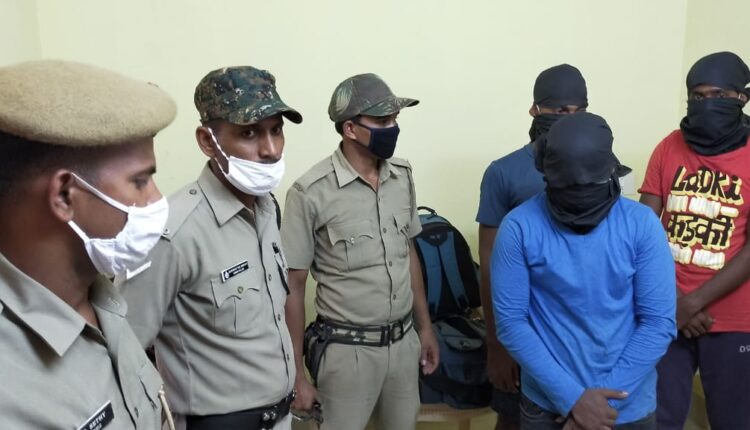 Berhampur: Odisha police claimed to have cracked the murder case of a milk trader with arrest of three accused persons including the mastermind in Ganjam district.

The arrested persons are Rupesh Padhy alias Lala (mastermind), Shiva Mahankuda (23), both residents of Neheru Nagar under Gosaninuagaon police limits. The third accused is Ranjit Sahu (23) of Bhismagiri village under Digapahandi police limits. He is a cab driver residing at Duduma Colony under Badabazar police limits.

The trio was arrested in connection with the sensational murder of Lambodar Muni, a proprietor of milk products of a popular brand in Ganjam district.

However, two others are still at large in the murder case.

According to reports, the 24-year-old Rupesh along with his associates had trespassed to office-cum-residence of the 66-year-old businessman at Hillpatna for robbery on June 13 night. During committing the crime, they killed Muni by smothering him with a Gamuchha and fled from the spot with huge cash and gold jewelries.

Based on a complaint by manager of the dairy company, a cased was registered under section 458/394/302 of IPC at Gosaninuagaon Police Station on June 14.

Rupesh Padhy, who was working as a driver of the milk company, is the mastermind in this case, said the police in a release today.

During investigation, three persons involved in the murder case were arrested on June 17 and 18 and recovered cash of Rs 4 lakh, a gold chain weighing 98 gram, a wrist watch, a pair of gold earring weighing 3 gram and a gold finger ring from their possessions.

The police also seized router, modem, which were taken from the deceased’s resident following murder.

Two other accused persons are absconding. After apprehension of the two, rest of the property can be recovered, the release stated.

With arrest of three persons, the case has turned to section 460/396 of IPC.