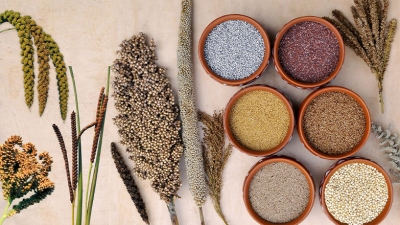 New Delhi: As The International Year of Millets (IYM) began, Indian embassies across more than 140 countries will be participating in celebration across the year, the government said.

Exhibitions, contests will be organised with the help of Indian diaspora and Millets dishes will be served as part of the Republic Day celebrations.

Millets are also an integral part of the G-20 meetings and delegates will be given a true millet experience through tasting, meeting farmers and interactive sessions with start-ups and FPOs, the agriculture ministry said in a statement.

The Millets Food Festival would be held at the High Commission premises and provide stalls for preparation with invitees including both Nigerian dignitaries and Indian community.

Millets were among the first crops to be domesticated in India with several evidence of its consumption during the Indus valley civilization. Being grown in more than 130 countries at present, Millets are considered traditional food for more than half a billion people across Asia and Africa.

In India, Millets are primarily a kharif crop, requiring less water and agricultural inputs than other similar staples. Millets are important by the virtue of its mammoth potential to generate livelihoods, increase farmers’ income and ensure food & nutritional security all over the world.