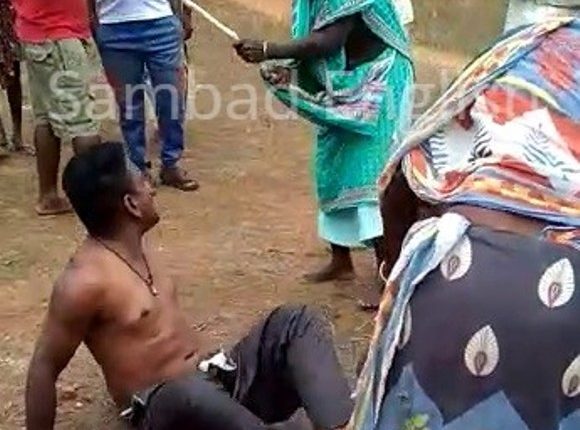 Baripada: Two persons including a minor boy were beaten up brutally by locals for allegedly stealing two goats in Odisha’s Mayurbhanj district.

The incident took place near Dardiasole area under Kuliana block on Wednesday.

According to reports, a youth identified as Situ Rana (32) along with his associate, who is a minor boy, had fled on their motorcycle after allegedly stealing two goats of Ramdas Murmu, a resident of Phuljhara village under Kuliana block. Chasing the thieves, the villagers caught the duo near Dardiasole village under Keutunimari panchayat.

The irate locals started assaulting the two with sticks for the theft.

A video shot on a mobile phone during the period showed that the accused duo was surrounded by the villagers and was asking for mercy. The women thrashed them with a stick when they denied the theft charge.

Source said that the two robbers stole the goats from while the domestic animals were grazing near an embankment yesterday afternoon. The duo was detained by the locals and was handed over to Chandua police.

The police arrested the youth and detained the juvenile for interrogation.