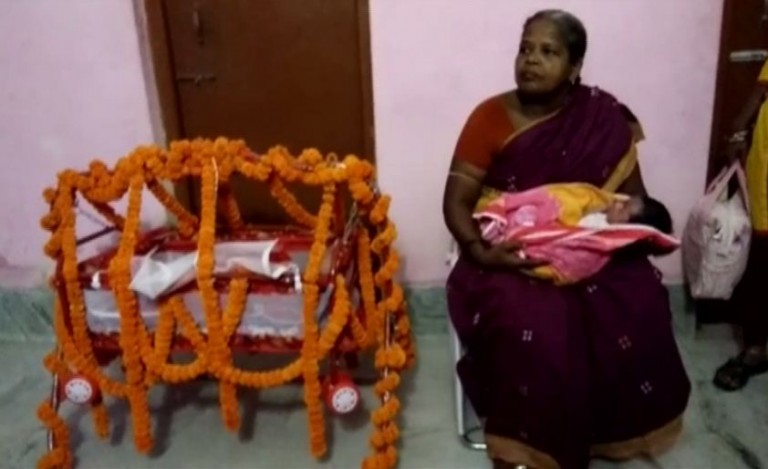 Jajpur district administration today observed ekoisia (ceremony/ritual held on the 21st day of a baby’s birth in Odisha) ceremony of ‘miracle baby’- Dharitri with pomp and show at the Biraja Kalyan Mandap near Biraja temple here.

The function was organized jointly by the district administration and District Child Protection Cell.

Baby girl-Dharitri, who is currently residing at Basundhara in Cuttack since her adoption by the Jajpur district administration was especially brought here for her ekoisia ceremony today.

“Dharitri is not unwanted. She is the affectionate baby daughter of the district administration. Her ekoisia is being observed by the district administration. For Dharitri’s ekoisia Biraja Kalayan Mandap has been decorated. A feast too has been arranged in which esteemed guests will participate,” said Niranjan Kar, Child Protection Officer, Jajpur.

Notably, the baby girl was found buried alive at Shyamsundarpur village under Dharmasala block in the district on March 25.

After hearing an infant’s shrill cry near a field, villagers spotted its feet stuck above the ground in a garbage dump. They dug the earth to find the baby buried upside down with a piece of cloth wrapped around.

The infant was first rushed to the nearby Community Health Centre (CHC) and later admitted to the District Headquarters Hospital.

The next day after she was rescued, the district administration decided to adopt her and had announced to observe her ekoisia ceremony.

Later, on March 28, police arrested Ramesh Basantia, the baby girl’s father who had buried her alive.

Ramesh had confessed to having buried the newborn in the garbage dump near his house nearly two hours after his wife delivered the child at their home.