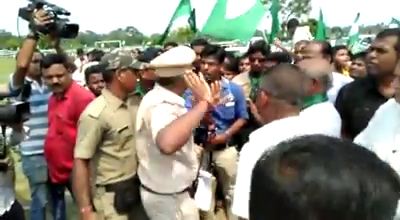 Kendrapara: Odisha DGP RP Sharma has ordered for a probe into the incident of a journalist being allegedly manhandled by Kendrapara SP Niti Shekhar.

IG, Central Range, S.K.Priyadarshi has been asked to investigate into the matter. Necessary action will be taken after submission of report, the DGP said.

On the other hand, opposition parties BJP and Congress today raised the issue in the Odisha Assembly demanding action against the SP. Both parties also demanded a ruling of the Speaker in the matter.

During Zero Hour, Leader of Opposition and BJP MLA Pradipta Naik said the incident is an insult to the fourth pillar of democracy and the SP should either be transferred or suspended.

Similarly, Congress MLA Tara Prasad Bahinipati condemned the incident terming it as ‘unfortunate’ and demanded action against the police official.

Amid ruckus by the opposition parties over the issue, Speaker Surjya Narayan Patro adjourned the House till 3 pm.

Notably, a video had yesterday come to fore, in which the SP was purportedly seen pushing and shoving Ajesh Mallick, a reporter from a private news channel, who had gone to cover a rally of BJD President and Chief Minister Naveen Patnaik at Barimul in the district.

The incident took place near the CM’s helipad amid presence of a huge crowd and several policemen.