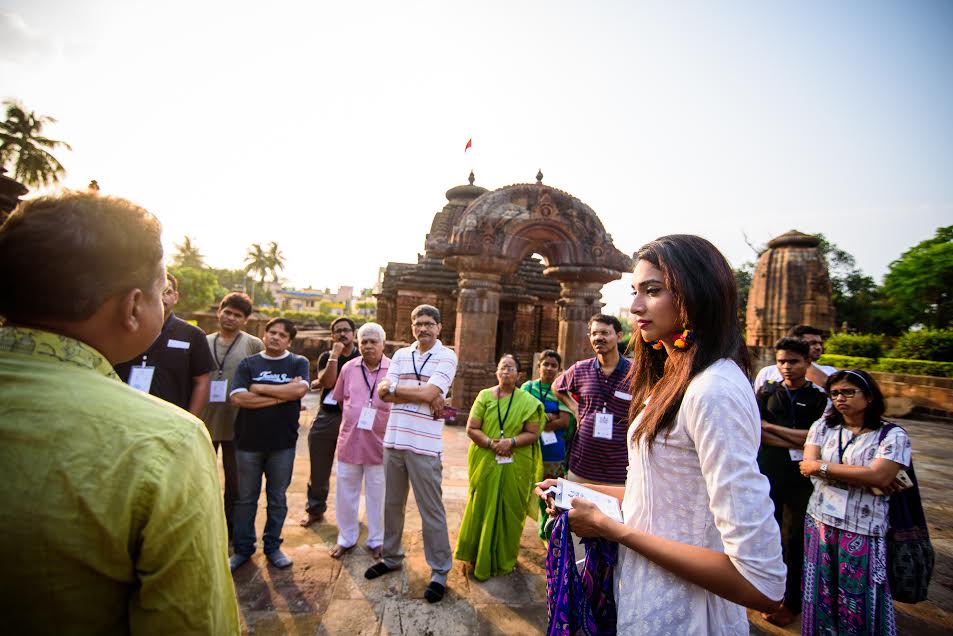 Over 40 walkers got a special treat on heritage and architectural wonders of Odisha capital at Ekamra Walks on Mother’s Day.

A noted tour operator from Germany, top bankers from SBI, Miss India hopeful from Odisha and academics from a top management institute had joined the heritage walk in old Bhubaneswar.

Chief General Manager of the State Bank of India B. Venu Gopala Reddy, Sujith Soman, Executive Director of COMINDIA, an Indo-German tourism venture, based in Essen, Germany, participated in the event proving its growing popularity and reach, worldwide.

The Ekamra Walks became more glamorous with the Odisha hopeful for the Miss India, Christeena Biju joining the visitors and making them feel with her as she would be representing the culturally rich region at the national finale. Biju also had a session for her short documentary made to represent Odisha, at the finals.

Professor at Xavier University Bhubaneswar (XUB) in Industrial Relations, Analytics and Human Resource Girish Balasubramanian also came with his family. Though he belongs to Tamil Nadu and is currently staying in the city, today’s experience was an “interesting and educative’’ exposure on the monumental wealth of the city, he said participating in the walk.

“This needs to be propagated more,’’ he added.

Chief general Manager of the State Bank of India B. Venu Gopala Reddy said “Ekamra Walks is the true reflection of the city’s ancient past and socio-cultural heritage and more and more people must come and explore it.’’

Sujith Soman, Executive Director of COMINDIA, an Indo-German tourism venture, based in Essen, Germany, said “I have a rich experience in promoting the tourism potential in Europe and especially in Germany, but somehow missed Odisha. I am really overwhelmed with the rich architectural wealth of the city and hope that it would definitely attract more and more visitors from Germany. He also hinted at a detailed plan to engage the German media and the key players in the tourism industry to promote Odisha in Germany.’’

Director Tourism Nitin Bhanudas Jawle and other senior officials of the department, present at the Ekamra Walks also hoped that with the participation of top tour operators from Europe, Ekamra Walks would definitely go a long way to promote and brand a city like Bhubaneswar, which was adjudged as the best city with respect to the planning aspect by the Smart City Mission in the past.

The Miss India hopeful Christeena Biju said “our city is a treasure-trove of historical monuments and sites and we need to promote them so that tourism based on heritage would get a proper scope in the national and international sphere.’’

With the 22nd Ekamra Walks coinciding with Mother’s Day today, tour guide Satyaswarup Mishra also explained how women and mothers were also getting appropriate projection in the temple building and pointed at statues of mother and child on the walls of Mukteswar Temple, from where the Ekamra Walks starts.

Later at Parsurameswar Temple, Mishra also explained about the Sapta Matruka (Sevan forms of Shakti), which are represented as the seven furious forms of the Devi Parvati or Shakti. It is a well-known fact that to safeguard her child a mother can take up any furious form so that the child remains safe and out of danger. According to Hindu mythology and the traditional temple building code or Shilpa Sashtra the temples were also designed as human bodies and there were always ample representation of statues representing various forms of women, including mothers.

While at the medicinal plant garden at Ekamra Van the guests got the update on designing the Ayurveda garden on the different requirements of men, women and kids, at Art Vision they witnessed an interesting dance recital on Krishna Leela. As Sari Deula the guests got a firsthand experience on the reconstruction of a temple as per the ancient tradition.

3 Odia girls step in to stop child marriages in Bhubaneswar…