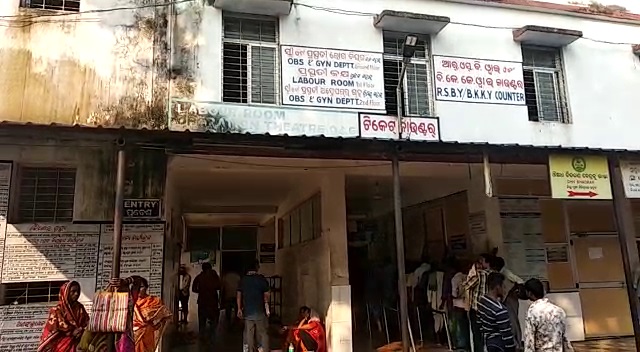 Bhadrak: Amidst rigorous visit of top bureaucrats to various districts to review the implementation of ‘ Mo Sarkar’ initiative, question again raised on Chief Minister Naveen Patnaik’s 5T formula with another delivery on verandah of a state-run hospital in Bhadrak district.

According to reports, an expectant mother of Taladumuka village under Tihidi Block had visited the DHH today for delivery. Instead of attending to the patient, the doctors referred her to Cuttack following blood test. Despite requests of her family members for clinical delivery at the hospital, the doctors denied to admit the patient at the hospital. During the period, the patient complained of labour pain following which she delivered twin on hospital verandah.

The family of the patient alleged medical negligence by the doctors who put woman’s life at risk by returning her from hospital.

“We reached the hospital at 11.00 am and on instruction of the doctors, we conducted blood test. When we approached the doctors, they asked us to shift the patient to Cuttack for delivery. We were waiting on verandah to take her to Cuttack. When she suffered labour pain, we again requested the doctors to admit the patient and examine her condition, but they remained stick to their decision. Later, she delivered twin girls on verandah. Following delivery, the patient was shifted to a ward,” said Dukhiram Khilar, the woman’s father-in-law.

This reminds of an incident of unsafe delivery in the state capital where a poor expectant mother gave birth to a baby on footpath after being denied admission at the Capital Hospital on Friday night last week.

When the bureaucrats along with 5T Secretary are busy at their field visits to ensure better healthcare services at the state-run hospitals, such incidents clearly prove the lapses in implementation of 5T formula under Mo Sarkar programme in the state.