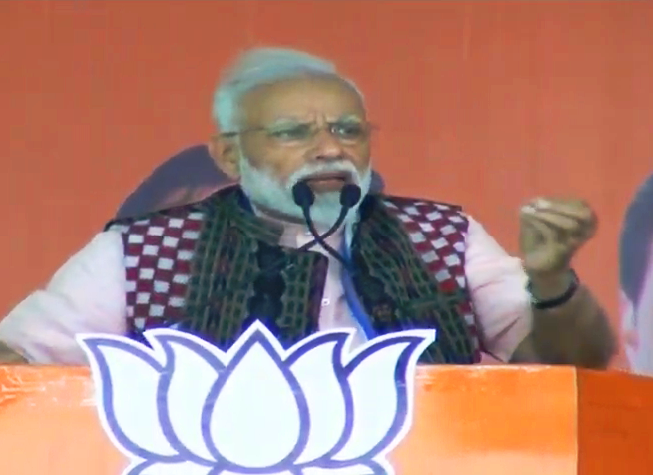 Sambalpur: Continuing with the election rhetoric, Bharatiya Janata Party (BJP) leader and Prime Minister Narendra Modi today assured the people of Odisha to provide pucca house to each poor and underprivileged person in the State by 2022.

Addressing a public meeting here, Modi said over 12 lakh pucca houses have so far been constructed in the rural pockets of Odisha during the last last five years. BJP will provide pucca house to all poor and Adivasi people in the State by 2022, if BJP is voted to power, he added.

“Mark my words. When Modi will again come to power on May 23, each poor, underprivileged, destitute and Adivasi families in the State will have their own pucca house by 2022. The houses will have basic facilities like Ujjwala gas and electricity connections along with and toilet,” Modi asserted.

Exuding confidence in party’s poll prospects in Odisha, Modi said the the recently-concluded first phase polls in Odisha clearly indicate that BJP will again come to power in Centre and it will form Government in Odisha this time. People are supporting the party because they want a strong Government, he added.

He also announced sops like direct cash transfer to bank accounts of farmers in the State, formation of separate Ministries of water resources and fisheries for the welfare of farmers’ community.

Modi later went on attacking the BJD Government alleging corruption. Without taking any name, Modi alleged that despite having assets like Mahanadi river and Hirakud reservoir, farmers are dying for a single drop of water.

“The BJP hiked 1.5 fold MSP for wheat and paddy. Bit the Government has not made any arrangements for procurement of the same,” Modi said adding that only 8.5 lakh farmers in Odisha have received the first installment of the financial assistance under PM-KISAN scheme of the Centre since the Odisha Government has not sent the full list till yet.

He further attacked the BJD Government over Rs 1 per kg rice scheme and said, “The Central Government procures rice at Rs 19-30 per kg and send it to Odisha. The Odisha Government adds only Rs 2 per kg to it and claims that they provide rice to the people at subsidized rate. It’s an utter lie.”

He further alleged that central funds are not being utilized properly in Odisha. Out of every Rs 1 sent to the State, 85 paise is being taken away away by middlemen. Only 15 paise is reaching the poor.

If this continues, how the State will develop?, questioned Modi stating that the BJP will ensure cent percent utilization of the central funds for welfare of people here.

“For the last 20 years, you blindly trusted the Government that has given protection to chit fun Mafia and mining scammers and is also embroiled in PC (percentage commission) culture. Now its time to bring a change in the leadership..it’s time to eject the BJD Government,” Modi insisted.

Elections 2019Mod promises pucca houses to all in OdishModi in Odisha

Bijepur residents my family, its devp my responsibility: Odisha CM