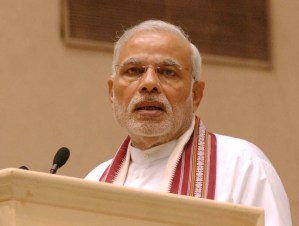 But for the drama of the Shiv Sena’s boycott of the swearing-in ceremony of Narendra Modi’s expanded council of ministers, the occasion – the first expansion of his five-month-old government – passed off as a routine event.

However, the fact that the Sena’s nominee, Anil Desai, took the morning flight from Mumbai to Delhi to attend the ceremony, and then immediately flew back, suggests that the gulf between the Bharatiya Janata Party (BJP) and its currently estranged former ally centres on relatively petty matters — such as a nominee’s position in the council of ministers or the ties between the two parties in Maharashtra — rather than on any substantive issue.

Clearly, it is inflated assumptions and hurt egos which are behind the Sena’s tantrums. There is little doubt that the scrappy regional outfit is finding it difficult to accept Modi’s authoritative style of governance where the prime minister’s word is law where cabinet formation – and virtually all other matters of party and government – are concerned.

Modi’s assertion of his unquestionable prerogatives as the PM was also emphasized by his choice of Suresh Prabhu, who formally belongs to the Sena. But, since he is also known as a favourite of the prime minister, largely because of his expertise in certain issues of global importance, he has been inducted as one of the four cabinet ministers, even if the elevation is regarded as a snub to his party.

His appointment puts at rest the speculation that he will be the head of the new body which will replace the old Planning Commission. But, Modi obviously felt that he needed the technical skills of Prabhu, more in a government which is not overly burdened with capable people than in a planning body whose functional parameters are yet to be determined.

Of the other three cabinet ministers, former Goa chief minister Manohar Parrikar’s choice was a foregone conclusion ever since he was expected to relieve finance minister Arun Jaitley of the latter’s additional burden of defence. That Parrikar was the first to take the oath as a cabinet minister – followed by Prabhu – underlined his importance in the scheme of things.

While the old faithful J.P. Nadda’s nomination as a cabinet minister might be seen as a recognition of his long service to the BJP and the efforts which he successfully made along with Amit Shah to improve the party’s position in Uttar Pradesh, it will be wrong to read former Congressman Birender Singh’s inclusion in the cabinet as a concession to Jats after the BJP had nominated a non-Jat, Manohar Lal Khattar, as the Haryana chief minister.

Nor is it a concession for not making him the Haryana chief minister as was expected before Khattar was chosen. Evidently, intricate calculations based on local factors, including the interests of influential communities, went into these selections. Now, even if belatedly, Birender Singh’s appointment is an acknowledgment of the primacy of his position in Haryana.

As a grandson of Sir Chhotu Ram, one of the most prominent politicians of the region in the pre-partition days, his influence can hardly be underestimated. However, since the Congress marginalized him and preferred Bhupinder Singh Hooda instead, Birender Singh probably had no option but to break his association of more than four decades with the Congress.

Of the other choices, the appointments of Girijaj Singh and Ram Kripal Yadav as ministers of state are patently aimed at strengthening the BJP’s position in Bihar which will go to the polls next year. However, in the context of Girijaj Singh’s offensive comments before the general election, when he advised Modi’s critics to go to Pakistan, and the discovery of unaccounted money from his home, his appointment cannot but raise a few eyebrows.

There is little doubt that the vituperative expression of communal sentiments, or ethical factors, are not of primary interest to Modi when he weighs them against the electoral advantage which a person’s nomination provides. Nor is defection from another party held against the person. Yadav, for instance, was earlier with Lalu Prasad Yadav, just as Birender Singh was with the Congress.

Just as Giriraj Singh and Ram Kripal Yadav have been selected with an eye to Bihar, the choice of Babul Supriyo Baral, a singer-turned-politician from West Bengal, is a sign that the BJP now looks upon West Bengal as a state where it can fill the growing vacuum created by the Trianmool Congress’s decline and the inability of the Left and the Congress to step in.

The steep jump in the BJP’s vote share in West Bengal from six percent in 2009 to 16.8 in last May’s parliamentary polls seems to have convinced the BJP that it has a fair chance in the state in view of Mamata Banerjee’s dwindling popularity. Babul Supriyo Baral’s election from Asansol is also evidence of how the BJP’s influence has spread from the urban middle class areas to an industrial zone like Asansol.

*Amulya Ganguli is a political analyst. The views expressed are personal. He can be reached at [email protected] IANS

Dhanush thanks K.V Anand for ‘Shamitabh’: