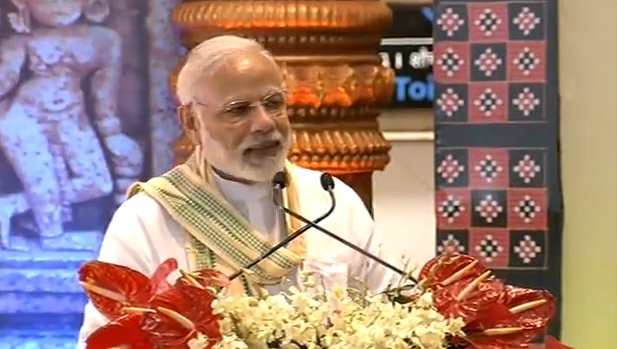 Talcher:  For the first time, Prime Minister Narendra Modi took a jibe at Odisha Chief Minister Naveen Patnaik over Ayushman Bharat scheme during his one-day visit to the state today.

Addressing a public meeting at Talcher, Modi said Odisha is yet to be included in the Ayushman Bharat scheme even though the State has poor healthcare facilities. He exhorted CM Naveen to be a part of the scheme to benefit the people of the State.

“If Odisha comes under the scheme, people of Odisha will be able to get health care facilities anywhere in the country free of cost. But If the Government does not cooperate, I will not be able to serve you.”

This apart, Modi took credit for the Rs 1 rice scheme in the State claiming that the Odisha Government is able to implement the scheme because the Centre contributes around Rs 450 crore per month for the scheme.

“People of Odisha are not aware of the contribution of the Centre to Rs 1 rice scheme benefiting 85 lakhs people in the State. The Odisha Government is able to give one kg rice at Rs 1 because  the centre gives Rs 25- Rs 30 per for the same.  The Centre is giving around Rs 450 crore per month to the Odisha CM for for the scheme.”

At another public meeting in Jharsuguda, Modi again criticized the Naveen Patnaik-led BJD Government in the State over corruption. He said, “Corruption and delay in decision-making have become the identity of Odisha. It is creating a barrier in the development process of the State that reels under infant and maternal mortality and malnutrition.”

Earlier in the day, Modi laid foundation stone for a fertilizer plant in Talcher and Veer Surendra Sai Airport and two coal mines of NTPC and MCL, among other projects, in Jharsuguda.