Moments of a star’s death captured by Hubble Space Telescope

MISCELLANYSCIENCE & TECHNOLOGY
Sambad English Bureau Published On : Oct 28, 2021 at 8:42 AM 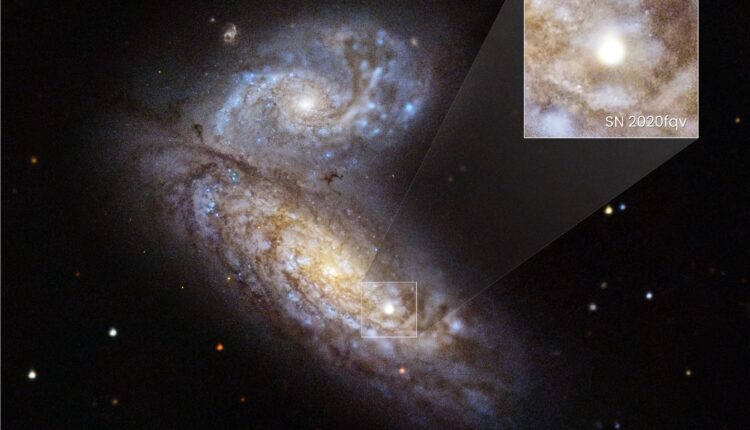 Hubble’s data, combined with other observations of the doomed star from space- and ground-based telescopes, may give astronomers an early warning system for other stars on the verge of blowing up, NASA said in a statement.

The supernova, called SN 2020fqv, is in the interacting Butterfly galaxies, which are located about 60 million light years away in the constellation Virgo. It was discovered in April 2020 by the Zwicky Transient Facility at the Palomar Observatory in San Diego, California.

The astronomers could see the first holistic view of a star in the very earliest stage of destruction. Hubble probed the material very close to the star, called circumstellar material, mere hours after the explosion. This material was blown off the star in the last year of its life. These observations allowed astronomers to understand what was happening to the star just before it died.

“We rarely get to examine this very close-in circumstellar material since it is only visible for a very short time, and we usually don’t start observing a supernova until at least a few days after the explosion,” said Samaporn Tinyanont, lead author on the study’s paper published in the Monthly Notices of the Royal Astronomical Society, in the statement.

“For this supernova, we were able to make ultra-rapid observations with Hubble, giving unprecedented coverage of the region right next to the star that exploded,” Tinyanont added.

Further, this could also act as a warning system, the team said.

“So if you see a star start to shake around a bit, start acting up, then maybe we should pay more attention and really try to understand what’s going on there before it explodes. As we find more and more of these supernovae with this sort of excellent data set, we’ll be able to understand better what’s happening in the last few years of a star’s life,” said Ryan Foley of the University of California, Santa Cruz, the leader of the team that made this discovery.