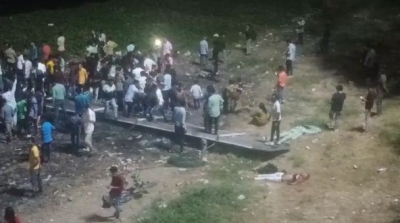 Morbi: In wake of the hanging bridge crash, which left at least 35 dead and scores missing, in Gujarat’s Morbi on Sunday evening, the Morbi Municipal Committee’s Chief Executive Officer S.V. Zala, in a shocking revelation, said that the bridge was opened for the public without a fitness certificate.

He even claimed that it is possible that the company might have got a fitness certificate from the engineering company, but it was not submitted to the municipality till date. The company, on its own and without informing the civic body, reopened the bridge for the public, he alleged.

Former Deputy Chief Minister Nitin Patel also told the media that normally when bridges are constructed or renovated, before opening it for public, technical assessment is must, and load bearing capacity is tested and only after this is a usage certificate issued by the authority concerned and the bridges can only then be opened for the public.

This hanging bridge was constructed by Morbi Dynasty rule Sir Vaghaji Thakor some 150 years ago, and its length is 233 metres and it is 4.6 feet wide.